Easily Amsterdam’s most anticipated celebration of the year, the streets glow orange on Queen’s Day. Historically, it’s celebrated on the current queen’s birthday, but Queen Beatrix kept the April 30 date in tribute to her late mother, Queen Juliana, and because her own January birthday isn’t conducive to outdoor partying and street drinking.

On Queen’s Day, Amsterdam transforms into a giant carnival-style street party, but the fun starts the night before on the preluding holiday Queen’s Night. When the sun sets, Amsterdam turns its nightclubs inside out as DJs take to the streets in celebration of Her Majesty.

Think of it as a city-wide music festival, with Amsterdam’s finest taking to the turntables.

Good old-fashioned street celebrating is free, but if you’re looking for some inside fun, head to Melkweg (Lijnbaansgracht 234 a 1017 Ph) for house and techno beats ‘til the break of dawn for €27 (£24). Or check out WesterUnie (Klonneplein 4-6 1012 DD), legendary for its over-the-top Queen’s Night shenanigans for €15 (£13). 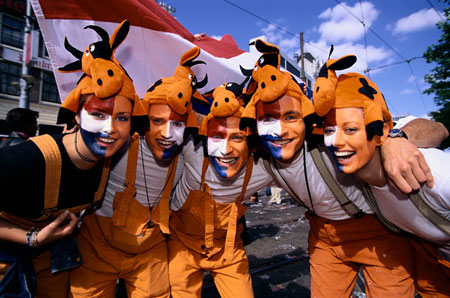 Orange doesn’t appear in Netherland’s national flag, but it’s is considered the country’s national colour. The tradition stems from the name of the Dutch royal family, the House of Orange.

Because of this, you’re naked if you’re not wearing orange on Queen’s Day – much worse than forgetting your green on St Paddy’s. The Dutch call it ‘oranjegekte’ or ‘orange craze.’

Queen’s Day begins the second you wake up from your Heineken-induced coma, so swim through the orange ocean to the city centre, where you’ll find the world’s largest free market or ‘vrijmarkt.’ It’s the one day of the year that the Dutch government allows the selling of goods without a licence or a sales tax. Some1.8 million amateur vendors pitch a table with anything from homemade pies to used nail clippers. 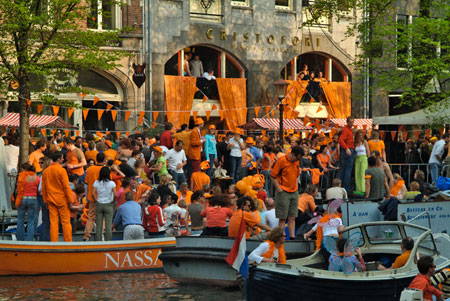 You can’t leave Amsterdam without taking in some tourist attractions. Amsterdam is famous for its red light district and coffee houses, but the city is steeped in a rich cultural history as well. Check out the Van Gogh museum, which houses the largest collection of paintings by the eccentric Dutch artist.

Or head to the Anne Frank house, the site where the inspirational young Jewish girl wrote her diary about living under Nazi occupation in Holland.

When to go: Queen’s Day is on April 30, but be sure to arrive in time to get rowdy on Queen’s Night, April 29.
Getting there: EasyJet (easyjet.com) flies directly from London Stansted. Trains depart from St Pancras International (eurostar.com) or catch a coach from Victoria (eurolines.com).
Visas: South Africans require a Schengen visa.
Currency: Euro. 1 GBP = 1.17 EUR.
Language: Dutch, but the friendly locals will help you out with English.
Getting around: Public transportation won’t be running in the city centre, so break out the walking shoes.
Going out: Expect to pay about €5 (£4.40) for a beer.
Accommodation: Hostel dorms from €12pn (£10.50).