Travelling on – Morocco: Top 5 things to see and do

Cook a Tagine in Essaouira

The laidback beach town of Essaouira is the perfect spot to learn how to prepare a tasty Moroccan tagine, a flavoursome stew slow cooked in a conical-shaped dish also called a tagine, cleverly designed to seal in the spicy fragrances. Take a four-hour workshop in authentic yet sleek L’Atelier Madada and suss out how to make the perfect cup of mint tea, laced with lashings of sugar, a vital part of Moroccan culture after every meal.

After indulging in the fruits of your labour, enjoy a tour of the hippy town’s fish and spice souk (market), chock full of olive mountains, caged chickens and suspicious looking medicines – herbal Viagra anyone? Much of what’s on offer is not for the faint-hearted: think blood-smeared decapitated rams’ heads.

Escape the gore by retreating to one of the market’s small spice shops, stocked with an array of glass jars filled with heady spices, henna dyes and sweet smelling perfume sticks, such as gazelle musk. 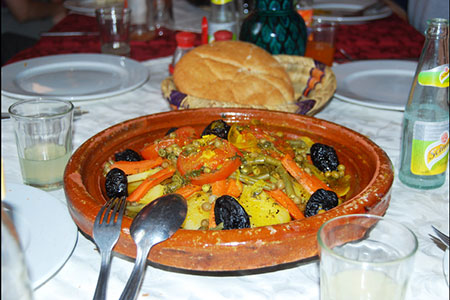 A 25-minute drive north of Agadir, Taghazout is a mecca for surfers as it boasts an enormous stretch of coastline and 330 days of sunshine a year with temperatures rarely dropping below a toasty 20°C. Surf spots aren’t swamped and the warm water and consistent waves makes for a pleasant ride. Whether you’re a novice or a super-star surfer, Taghazout has a break for you. Hash Point is known as the lazy man’s spot because it’s an easy right-hander that breaks near the shore, ideal for those who loathe paddling, while the Super Wedge offers small fun waves.

Haggle in the souks

Marrakech’s lively souks are a maze of small shops that curl around the backstreets of main square Jemaa el-Fnaa. A whirl of patterned rugs, gaudy slippers, spices, chess sets and hand-crafted crockery, the markets are best explored at night when pretty lanterns light the way. Don’t be shy about haggling; it’s an essential, and expected, part of the process. Shopkeepers will often want you to enjoy a cup of mint tea with them as you come to an agreement. 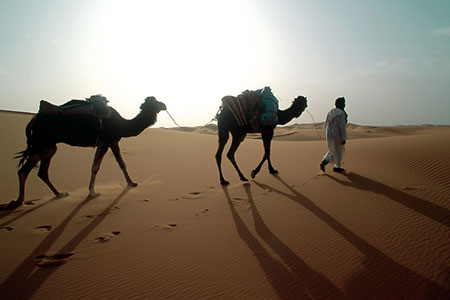 For the ultimate Arabian adventure, do a camel trek across the never-ending palm-tree dotted dunes of the Sahara desert while watching the blazing sun go down, changing the colour of the sand from cinnamon-yellow to blood-red. Camel rides often include the epic Erg Chebbi, an eye-popping gigantic mountain of sand that has inspired much myth and legend. Bed down between dunes in a traditional Berber camp under a star-studded sky.

The Berbers were the original inhabitants of North Africa, a people who managed to retain their traditions and culture despite the invasion of Arabs, Romans, Phoenicians and other tribes sent to conquer the tip of the continent. Most Berbers live in Morocco and although many have moved to the cities, three groups live in the Rif Mountains, the Middle and High Atlas ranges, and the Sahara.

Get scrubbed clean in a hammam

Don’t expect an entirely soothing experience when visiting a hammam (traditional steam bath), which can be found in luxury hotels and riads. You’ll be given a no-holds-barred scrubbing with black soap, which will wipe away any trace of dirt or tan, before having a bucket of water thrown over you, and then sweating it all out in the sauna. The experience is normally topped off with a soothing massage, so you leave feeling rejuvenated and super-clean.

Bum’s rush: Jockey full moons in sprint for the line

TNT bits of Information when in the shower…