Travelling on: Spirited Away in Sri Lanka

I’m learning my lesson the hard way: never accept a Sri Lankan curry with extra heat. But then I am eating with a local guide, in a local cafe, in the Sri Lankan holy city of Kandy – a situation that calls for authenticity, no matter how painful. I’ve even foregone cutlery for the native method; balling up the curry with rice in your fingers, then scooping it as elegantly as you can into your mouth. Consequently, I’m in desperate need of a bib.

Besides setting my tastebuds alight, I’ve come to Sri Lanka to explore a country that, despite recent conflicts, continues to earn itself a reputation as one of the most exciting, unsung destinations to walk the less-trodden road. Small and perfectly formed (you could nail it in three weeks, though a more leisurely pace is obviously preferable), the island’s pearl-shaped mass is flanked by India to the west and the Maldives in the south, making it a suitably tropical escape that’s also carving a reputation as a credible eco destination. 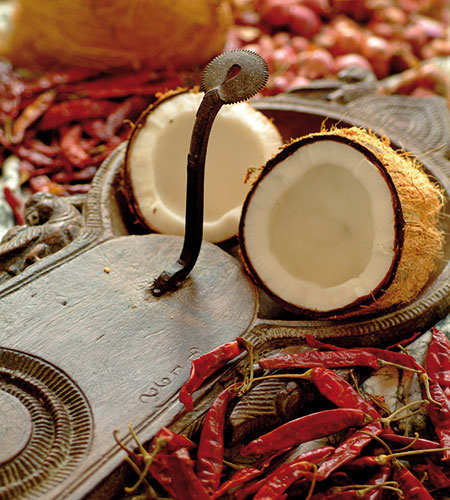 Like India, the legacy of tea production flourishes here, a result of opportunistic British colonialists visiting in the early 1800s and planting the crop some 1,500 metres above sea level. But it’s more than a canvas for fragrant green, black and golden tea buds; the country’s highlands serve up a rich and largely unspoiled portfolio of high-altitude hiking opportunities.

The pay-off for all the tourist-free trails, however, is the definite need (especially if you’re female and travelling solo) for a decent, trustworthy guide. I find mine in a quick-witted Sri Lankan named Ranjith, whose wealth of local knowledge is put to good use working for Red Dot, one of the few tour companies I’ve encountered who give you free rein to tailor your experience and don’t charge a bomb for it.

Greeting me with a firm handshake and a twinkle in his eye, Ranjith and I make the winding, two-hour car journey away from Colombo airport upwards and inwards past rice paddies and rubber plantations towards Kandy – Sri Lanka’s cultural capital.

Predominantly Buddhist (70 per cent of the country are practising Buddhists), the city emanates a calmer feel than other frenetic Asian metropolises I’ve encountered. After one of several spicy finger feasts, Ranjith and I stroll beneath an indigo sky towards the Holy Temple of the Tooth, or Sri Dalada Maligawa as it’s known to Kandyans.

Comparable to the Vatican in terms of religious significance to the global Buddhist community, the ‘sacred tooth relic’ is said to be the tooth of the Lord Buddha, retrieved from his funeral pyre. We’re lured towards the temple by a persistent drumbeat and whispers of hibiscus incense, perfuming the night air with a scent that’s unmistakably, hypnotically Asian. 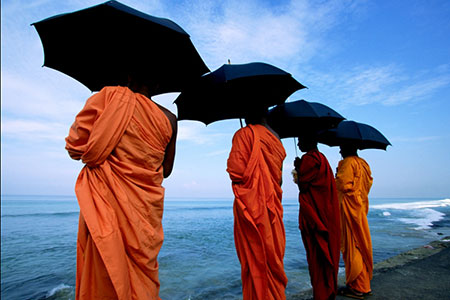 With bare feet and high hopes of seeing the famed tooth (once upon a time, the Sri Lankans believed whoever was in possession of the tooth had the divine right to rule the land, triggering wars fought to take possession of it), we enter numerous maze-like candlelit walkways and head towards the source of worship: a gilded, bulletproof wall behind which the legendary artifact has remained for hundreds of years.

Every inch of the 14th century palace’s stone floors and gilded mosaic walkways echo with peace; young and old alike can be found serenely cocooned in their own unshakable faith. I’m not one for religious beliefs, but it feels like something stirs within these walls.

Breathtaking moments come thick and fast in Sri Lanka, but spirituality lies not only in the magnificent architecture and gilded artifacts – it’s clearly present in nature too. The next day, after breakfasting on a juicy banquet of fresh papaya, king coconut and red bananas (Sri Lanka’s natural Viagra, a blushing Ranjith informs me), I depart Kandy in true colonial style onboard the country’s ancient hillside railway train. Introduced in the late 1800s by the British, it’s an efficient, not to mention enchanting, way to navigate the island’s dramatic topography.

Even Ranjith concedes, “Madam, the British bring good things to this country; you gave [us] this.” Minutes into the ride, I’ve got to admit Ranjit’s right about this particular ‘good thing’. The journey, especially if you can pre-book a seat in the observation deck ($7), really does take some beating.

A fully glass-fronted coach offers views straight from a Kipling novel; lush, emerald-hued fauna hugs the swirling contours of the hills as female tea workers go about their daily pluck mere metres from the train, deftly de-heading the bushes of their bounty as we slink deeper into old Ceylon (the English version of the name given to Sri Lanka by Portuguese invaders in the 1500s).

Top live music and club gigs this week: What’s on in London

Natural wonders of the world

Orbital head back into outer space