Travelling on to Jordan: We visit the Dead Sea, Bedouin tribes and Petra

Up to my nose in water, I haul myself out of the river and clamber gingerly on to the nearby rock to catch my breath and take in the view. Chances are when you think of Jordan, you’re more likely to imagine deserts and ancient monuments than canyoning in a river valley in the world’s lowest nature reserve. But while star destination Petra deservedly takes the spotlight, Jordan has more than a few surprising attractions which are still off the beaten tourist track.

Dotted around the country are Jordan’s seven protected nature reserves (rscn.org.jo), from the green wooded trails of Ajloun in the north to the dramatic Rift Valley at the Dana Biosphere and Wadi Mujib, near the Dead Sea, in the south. Helping to conserve the local nature and wildlife, as well as creating eco-tourism businesses to benefit the local communities, they’re a fantastic way to see the country. Which is how I end up taking an adrenalin-boosting hike-cum-scramble along the Siq trail in the Mujib Valley, 416m below sea level. 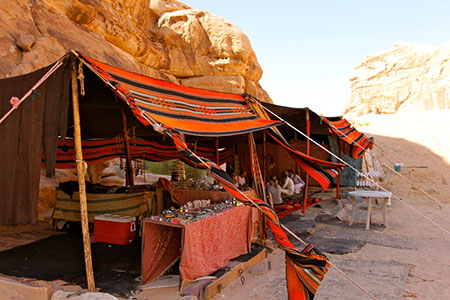 From our eco-chalets on the banks of the Dead Sea, we troop across the road to the start of the canyoning trail with our guide. You might get a bit wet, he warns, eyeing our plastic bag-wrapped cameras dubiously. Obediently, I roll up the legs of my trousers, head down the ladder into the towering canyon – and immediately step into the river up to my knees. Closed during the winter, as the water level rises too high to be safe, by the summer, the streams have drained off into the Dead Sea, letting visitors explore the valley.

Out of the heat of the sun, under the shady cliffs, it’s a stunning and calm setting – apart from my giggles as I half-walk/half-swim along the river path, clinging to ropes on the rock wall and hauling myself over boulders to reach the waterfall at the top where tiny fish nibble my toes, before speeding back to the bottom (in a fraction of the time) down the natural water slides.

After a quick float in the Dead Sea, smeared with enough mineral mud to make the monster from the black lagoon jealous, it’s time to explore further afield. As Jordan is the size of Portugal and with a better road network than most of its Middle Eastern neighbours, it’s not hard to get around. 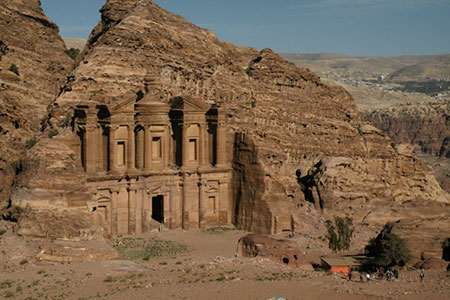 Further north there are the Roman ruins of Jerash and the town of Madaba, with its detailed mosaic map of the Biblical world, but I head south to the deserts of Wadi Rum. Rugged, unforgiving and starkly beautiful, the orange sands were famously home to Lawrence of Arabia. And, for many Bedouin, the Wadi is still their home. Sitting around the fire at Mzied’s Camp, I listen to Mzied talk about their traditional way of life, over an equally traditional meal and music.

After a night under the stars, we head out into the desert itself, the baking sands overshadowed by striking rock formations. Although you can choose a 4WD tour, the best way to explore is by camel, to really appreciate the landscape without seeing it through a cloud of dust. Stopping to climb one of the Wadi’s natural rock bridges, I look out at the empty landscape stretching into the distance.

People have lived in the stunning and inhospitable environment for centuries, and it’s still possible to see the ancient Anfashieh inscriptions, Nabatean graffiti dating back around 2,000 years, on the rocks. While the Nabateans left their drawings in the desert, they made far more of an impact at Petra. 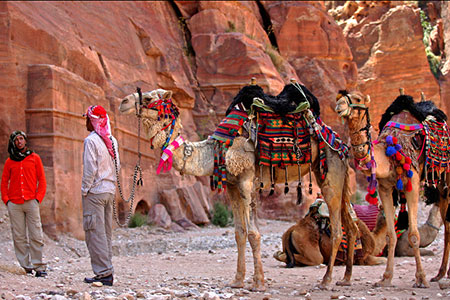 Voted one of the new Wonders Of The World, the facade of the Treasury may be almost as familiar as the Pyramids, but it still never loses its impact. Instead of hopping into the saddle of one of the skittish horses that belt up and down the narrow Siq, the main entrance to Petra, I walk the path, with niches and shrines for the Nabatean gods in the rock-face, as well as yet more camels carved on to the walls.

Finally the path opens up on to the famous rose-coloured Treasury, glowing in the sun as I emerge from the shadows. Breathtaking as it is, this is just the first of Petra’s treasures and I could easily spend days exploring the site, trekking in the high places and discovering the city’s tombs, temples and Roman-style theatre.

Instead, with only a few hours, I flag down a passing camel and headed over to the 800 rock stairs which lead up to another carved facade, the ‘Monastery’. Looking out from the summit to Petra below, it is the perfect reminder that, like so much of Jordan, if you stray just a little way off the beaten track there’s so much to discover – and no crowds to share it with.

‘Australia is the sex capital of the world’: The Inbetweeners head Down Under