Twenty-four-seven: gearing up for this year’s Rugby Sevens

Two English men, an Aussie and an American head to the Gold Coast. It sounds like the start of a hilarious joke, doesn’t it? And yet it isn’t the start of a xenophobic gag, it is the beginning of a big weekend away from Sydney. For those of you who haven’t visited the Gold Coast before, the best way to describe it is as a sunny, coastal mecca for events and general merriment.

The reason for our visit was the 2011 Gold Coast Rugby Sevens tournament which was held over two days at Skilled Park last year. The annual Rugby Sevens is probably one of the most debaucherous sporting events in history – two days with over 20 hours of costume-wearing, boozed up rugger action.

The Rugby Sevens phenomenon has become a huge thing with events held all over the world. The Gold Coast event is the first installment of nine venues globally, leading to its last hoorah in London. The tournament (although pretty normal in its sporting content) its clientele and general atmosphere is nothing short of bizarre. Eighty per cent of the audience are in fancy dress costumes – anything from macho costumes such as Stormtroopers, to men dressed as air hostesses.

My three mates and I decided to go for a ‘running of the bulls’ theme. Three of us dressed as runners with white cotton clothes and a cheeky red scarf to mop up the beer from our Movember moustaches.

My mate Adam, however, was dressed in a massive bull suit which was thick, black and furry. While we sat in breathable cotton, he was there the sweltering in the Gold Coast sun. It was probably not the best option. Good job we had plenty of fluids – albeit of the alcoholic variety.

The goals and the glory

The first day saw 16 teams battle it out by groups, aiming to make it into the finals on the following day. The usual suspects are involved with the Sevens; teams like England and Australia, however there are now teams like the South Pacific nation of Niue. None of us had heard of Niue before, let alone did we expect there to be such avid support in the crowd.

A normal Sevens match consists of two halves of seven minutes with a one minute half-time break. Seven players per team makes the game much more fast paced than Union or League. The Sevens game is huge in Samoa with less of the players tempted by big money to go to New Zealand and Australia as shown in games like Union or League. This means the Samoan team are a force to be reckoned with.

The Rugby itself is not the only entertainment for the day, however, the stadium is filled with activities and the sheer number and variety of costumes in the crowd gives the whole place an air of friendliness, camaraderie and good old fashioned Gold Coast fun.

The tournament is televised and the MC does a great job of keeping the crowd bopping along and Mexican waving. There are also sing-alongs and on pitch competitions – seeing a rotund man dressed as a hula girl (coconut bra included) chasing a man dressed as a pink crayon on the pitch has, for some reason, been seared into my memory. 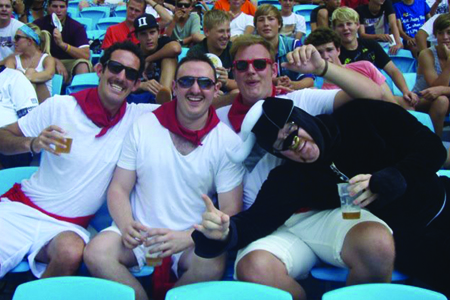 After a full-on day and enough drinking and singing to put the Barmy Army to shame, we head out for a night on the tiles in Broadbeach. The weekend also happened to coincide with the infamous Schoolies Week, which is like a two week ‘Spring Break’ for Australian highschool leavers.

A new phrase I learnt over the weekend was “being a Toolie,” which is essentially slang for someone that is far too old to be amongst screaming 17 and 18 year-old’s and participating in their afternoon goon drinking competitions. Luckily Broadbeach is safe from the marauding teens with most of the Schoolies’ action held up the road in Surfers Paradise.

The last day seems far busier than the first with all of the important games bunched up towards the end of the day. The support for Fiji and Samoa at the tournament is insane, the edge of the pitch is lined with flags and banners and cheeky, smiley South Pacific faces donning their team’s colours.

Another thing you undoubtably notice at the tournament, similarly on a weekend away in the Gold Coast, is the different nationalities and their capability to drink for 10 hours straight a day. While I can’t pin this on all Americans, our Yank counterpart, Justin, managed to go for a two hour nap in the stadium on the second day. We are still unsure of where, let alone how, someone sleeps in a fully-packed roaring stadium. I guess we’ll never know.

I might add that my mates and I were nothing short majestic in our capabilities to quaff copious amounts of beer and still have a fuzzy handle on which teams were doing what.

This year will be holy

This year’s event is being held on the 13th and 14th of October and early indications are that myself, and seven others joining us, will be dressed as nuns. Come and say hi and grab a shot of holy water on us.

To find out more, including how to get tickets, head to: goldcoastfeverpitch.com.au

Grenade explodes during football match between Iran and Saudi Arabia