Armed police shot the two assailants at the scene close to the Royal Artillery Barracks in Woolwich. A female officer shot the two men two were thought to be brandishing weapons, including a revolver.

One man died at the scene and two were in a serious condition in hospital, confirmed the London Ambulance Service.

An eyewitness, James Heneghan, told LBC 97.3 he and his wife had witnessed two men hacking at a third with two large kitchen knives.

“We saw the whole incident,” he said fighting back tears. “They were hacking at this poor guy, hacking him, chopping him.”

Woolwich and Greenwich MP Nick Raynsford told BBC Five Live he believed the victim of the attack was a serving soldier. 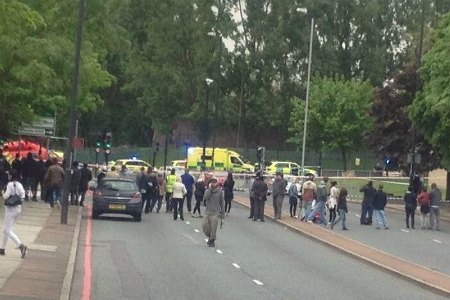 Luke Huseyin, 32, who lives in a block of flats on John Wilson Street, Woolwich, close to where the incident happened told The Daily Mail he watched two men murder a man before being shot.

He said: “I was at home and heard a big bang. I looked out of the window and saw a car had crashed.

“It was a blue Vauxhall. Then two black guys got out of the car dragging a white guy across the road towards the wall. One of the guys had a knife that looked about a foot long and a machete and the other bloke had a gun.

“They started slashing him up with the knife and hitting him in the stomach with the machete. I don’t think it took long before he was dead. There were people passing by who were screaming and running away. I’ve never seen anything like it.

The Independent Police Complaints Commission, which is called in whenever firearms officers shoot people, has said it is investigating.

A television news helicopter filmed footage revealing a large collection of weapons lying in the street in Woolwich following the incident.