UK Trip: Seal spotting on the Isles of Scilly – a perfect minibreak holiday

I‘d stood at Land’s End and believed I was looking out over the water towards America; that day at school, I realised I wasn’t – the Isles of Scilly had sat between Land’s End and me.

In fact, the Isles of Scilly lie just 28 miles from west Cornwall’s famous headland, made up of islands of varying sizes – five of which are currently inhabited. The biggest of the islands, St Mary’s, is less than five miles wide, and from there you can jump on any number of small boats that will take you to the neighbouring islands.

An essential Scilly experience is a seal-spotting sea safari, as grey seals are often found around the shores of the North Atlantic. Island Sea Safaris, run by Mark and Susie Groves, takes you on a two-hour journey from St Mary’s around several of the islands. “The seals tend to be found at three specific locations,” Susie informs us one breezy September afternoon. “So we’ll be visiting each of them. You’ve come at a good time of year, too, as this is when the seals tend to have given birth, so we’ll be on the lookout for pups.” 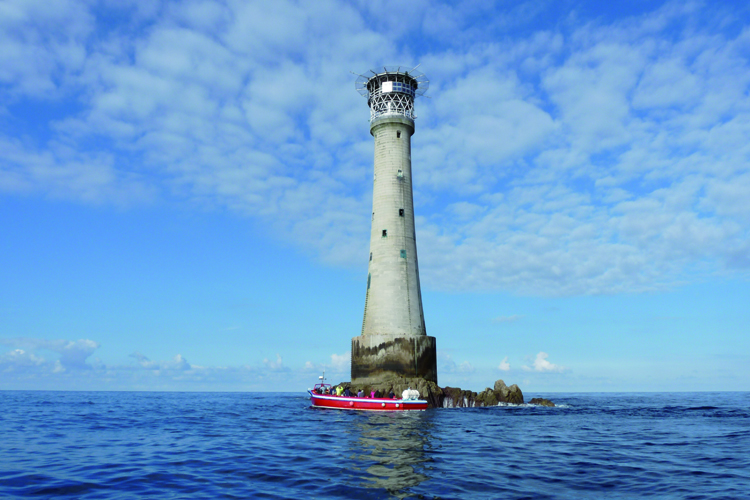 The promise is of some consolation as the boat races out of the harbour, bouncing in belly-worrying fashion over the waves as it gets up to speed. Ahead lies one of the uninhabited islands, Samson, identifiable by its two small hills dotted with ruins, and to the left, on the horizon, the silhouette of the lighthouse at Bishop Rock. We pass Tresco and Bryher on our right, and soon slow to a small rocky alcove to attempt our first sighting.

Susie hands out binoculars, and scanning the coast, it isn’t long before we see the first seal – a large head bobs around in the water, with a small bundle of white fur crawling on the rocks behind. “That’s mother and baby,” says Susie, pointing out how the mother is looking back at her young. “They only stay with the pups for two weeks, though, and that’s it.” 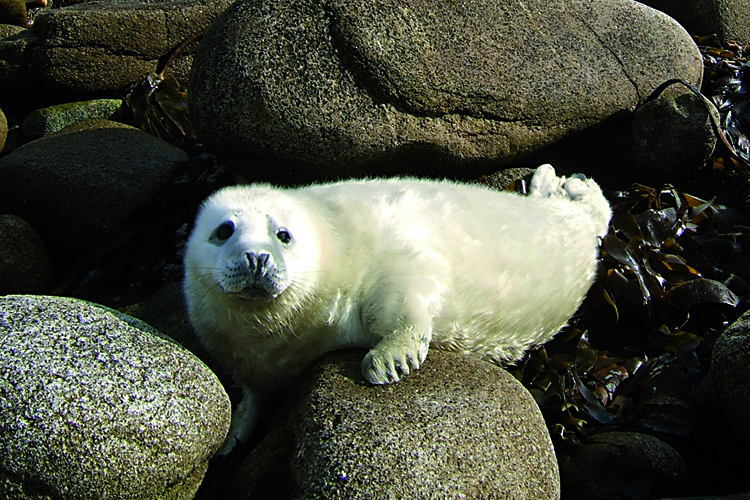 The boat engine soon kicks into life again and is back off across the sea. The next stop is on slightly rougher waters, between two sets of spiky rocks. Six or seven seals stare at us curiously from afar, their bodies submerged. “They like to know what’s going on,” says Susie. “And here is one of the few places that seals will give birth on rocks, most of the time they prefer sandy beaches.”

The rocks must have an alluring quality – a large amount of ships have crashed into them over the years, as Mark demonstrates, passing around a book of photographs showing various wrecks at the sea bed.

“That’s Scilly Rock over there,” Mark says, pointing at a large, imposing shape protruding from the water. “In thick fog, you wouldn’t see it. In the 1800s a boat from Bangkok carrying rice hit that and sank, and within 12 hours, another one from South America carrying rum and coconuts crashed into the other side.” It’s not the most reassuring testament to exploring the Scillies’ waters, but it’s worth hitting the waves to see the cute seals, and if you visit between April and July you can also spot puffins.

Be sure to spend some time on dry land, too, though. St Mary’s, being the first island you arrive at, is your hub for getting elsewhere. The majority of the landscape here is fields and coastal paths, great for walking, and being 28 miles from the mainland, cut off from crazy commuter life, does show. What you notice most is the peace and quiet, and the friendly attitude of the islanders. Smaller islands such as Tresco are even more subdued, with a single pub/hotel and one or two small shops and restaurants.

Put plainly, if you like the idea of a simple island getaway, the Scillies really couldn’t be any easier.

The Atlantic Inn is one of many dotted around St Mary’s near where the ferry drops you off – but the terrace overlooking the harbour sets it apart. (tel. 01720 422323).

Fancy a drink in a castle dungeon? Then head to Dungeon Bar at the Star Castle Hotel, and sip an ale in the bowels of a converted hilltop fortress from 1593.   star-castle.co.uk

The Isles of Scilly Country Guesthouse is in the middle of St Mary’s, surrounded by countryside. Rooms start at £29.50pppn, depending on time of year.  scillyguesthouse.co.uk

The most affordable option is by ferry from Penzance, which costs £42.50 each way.  islesofscilly-travel.co.uk

The ferry docks at St Mary’s, and smaller boats to other islands run from 10.15am, with return prices from £8.20.  scillyboating.co.uk

For more info on the Scilly Isles, go to  simplyscilly.co.uk