And by hibernate, we mean seek out the warmest, cosiest pub you can find, grab some comfy chairs near the fireplace and order round after round of the local brew. From a boozer in a cave to supping ales in a milking shed, here are some of the TNT team’s all-time favourite country-wide pubs at which you can do just that.

The Square and Compass, Dorset

When we call the Square and Compass an old country pub, we really mean it. This Jurassic Coast institution was converted from a pair of old cottages to an alehouse back in 1776 and it’s managed to hang on to that cosy cottage feel ever since. Think rustic, exposed stone walls and a huge fireplace, perfect for warming your hands at on a wintry evening. There’s plenty of entertainment on offer here, too – regular live music evenings, and even an on-site fossil museum with a collection of prehistoric findings from the Dorset countryside.

DRINK: You’ll be salivating over the pumps here, as there’s a wide range of locally brewed real ales. Choose between Palmers Copper Ale, Wessex Pride, or Square and Compass’ very own Mustang Sally. If you’re a cider drinker, a few pints of the Old Rosie or Cheddar Valley should keep you content. Pints from £3.30.

EAT: There’s no food menu here, but the pub serves homemade pies and pasties which cost £3.50 a pop. 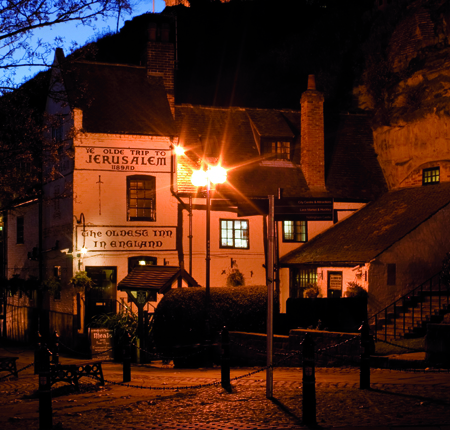 Let’s be honest, there are more than a handful of pubs that would bar-brawl to the death over their claim to be the oldest in England. That said, Nottingham’s The Trip does seem to have a pretty good excuse for calling itself 800 years old – there’s evidence of a brewhouse on its grounds as long ago as 1189AD. Either way, this pub has lasted a long time for good reason – it’s brilliant. Boozing is carried out in underground caves that are carved into the sandstone beneath Nottingham Castle. For extra ‘ye olde’ points, there are fireplaces, chainmail, medieval weapons, coats of armour, and a rumoured ghost, naturally. Take on locals and play the ancient ‘baiting the bull’ game, swinging a ring on to a bull’s horn on the wall.

DRINK: You’ll want to sup at least one round of the pub’s eponymous Olde Trip, which is a refreshing tipple, with malty flavours at first glug and a citrusy aftertaste. Lip smacking, and at a thoroughly decent £3.60, too.

The Cow and Plough, Leicestershire

This pub-restaurant is housed in the former milking sheds of a working farm. The taps stream a selection of Steamin’ Billy ales, which are named after the founder’s dog Billy, who apparently used to return from chasing rabbits over the countryside with steam rising from his back, and thirstily lap up half a bowl of beer. Well, we certainly know that feeling, Billy (er, the beer part, if not the rabbit-chasing).

DRINK: The Tipsy Fisherman comes highly recommended
– a nice crisp tipple of amber-coloured bitter. After something a little stronger? Try the dark, sweet Skydiver. Pints aren’t cheap here, though, at around £4 each. 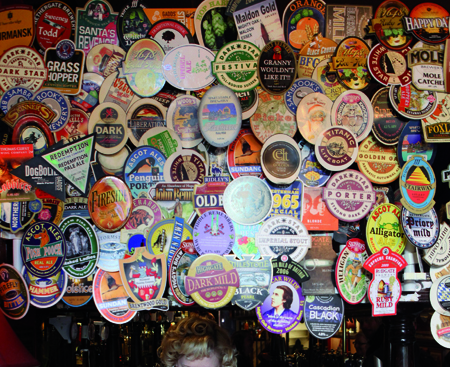 Serious ale connoisseurs will find themselves in good company at the Boathouse, Wylam, an alehouse that has won heaps of CAMRA awards. As their website puts it: “Every day at the Boathouse is a beer festival.” Sitting on the south bank of the River Tyne, around 10 miles west of Newcastle, this well-loved pub is old-school: dark wood, low beams, polished brass taps and old-fashioned stained glass windows.

DRINK: The beer selection changes all the time, but regular local brews include Hadrian Border, Tyneside Blonde, Tyneside Brown and Newcastle Pioneer. Around £3.50 each.

EAT: A traditional roast with peas, chips and gravy is a bargain at £6.65.

London sound: Music gigs and club shows to see this week, including Soundgarden and Babyshambles