Uneasy in Korea: We travel to the most heavily-armed border on Earth – the Demilitarised Zone (DMZ)

Remember – no laughing, no pointing and only your cameras in your hands. Don’t even tie a jumper around your waist or they might think that you are hiding a bomb.”

The tour guide’s words make me feel like I am out on a military exercise and not on holiday. But the safety precautions come as no surprise as my travel destination is the most heavily-armed border on Earth: the Demilitarised Zone (DMZ) that separates North and South Korea.

Or, to be more specific, I am about to enter the Joint Security Area (JSA) in the village of Panmunjom. This is the notorious place where enemy soldiers of a divided Korea stand face to face, separated only by a narrow demarcation line. 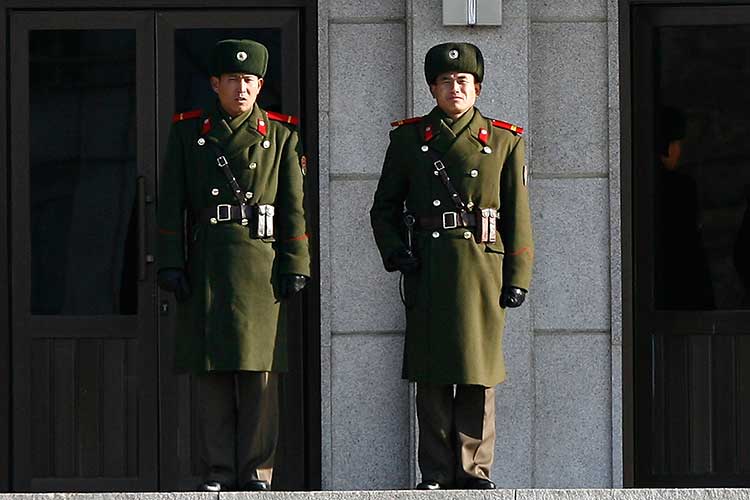 So here I am, in the heart of the DMZ, a 250km land strip secured with countless land mines and tank traps that has separated North and South Korea for almost 60 years. At present, the JSA is the only connection between the two countries.

To get there, I have my passport checked twice, undergo several safety briefings and even have to sign a declaration that my safety cannot be guaranteed “in the event of a hostile enemy act”. I can’t help but feel a bit uneasy, yet hundreds of visitors come here everyday which kind of helps me keep my nervousness at bay. And I really am curious to see this place that is more like a historical re-enactment of the Cold War.

I even went out of my way and put on my smartest outfit instead of the comfy clothes I normally wear. No sleeveless tops, mini skirts, shorts, thongs and torn jeans: The JSA has a dress code as strict as the Vatican. That’s because, as our tour guide puts it: “North Korean soldiers might take photos of you and use them for propaganda purposes.”

So, our fashion trends might be mistaken for worn out clothes according to that logic. I don’t know if that is all true, but as you can probably tell by now, the relationship between North and South is not exactly one based on mutual trust. Anyway, now that the checklist is ticked, we are allowed to proceed to the JSA. 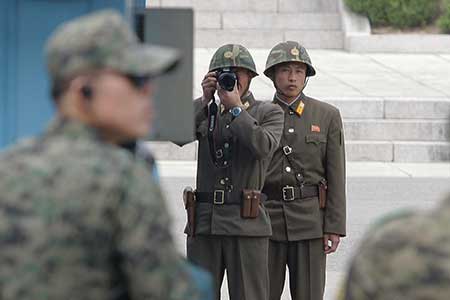 The atmosphere is tense and everybody seems to be on high alert. Korean soldiers on duty stand there motionless, facing north, their hands clenched in fists, dark sunglasses concealing their eyes. The northern side seems completely deserted.

But the fact that we can’t see the soldiers doesn’t mean that they’re not keeping a close eye on us. North Korea, one of the most secretive closed off countries on Earth, is only a few metres away behind a concrete slab. And yet, it is impossible to reach as you’d risk your life and those around you if you intended to cross.

But there is one place within the JSA where you can set foot on North Korean soil safely. There are three blue huts built right across the border and one of them is the conference room of the United Nations Command and North Korea. It has doors on the Northern and Southern side for the official parties to enter.

This is where negotiations take place from time to time. Nothing fancy here in this significant building, just a few long wooden tables equipped with microphones. South Korean soldiers block the doors to the North while we’re in, just in case…

After visiting the conference room, we’re allowed to take a few photos and then swiftly move back to the bus. As it’s our lucky day today, we get a glimpse of some North Korean soldiers patrolling the border just before we leave. As we drive off, I wonder how all these families feel after being separated for decades by this division. I remember a place we went to earlier in the day, called the Freedom Bridge. 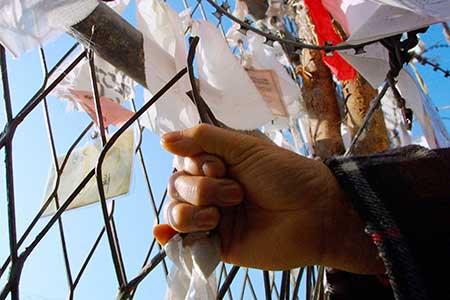 Hundreds of people have tied ribbons with their wishes for reunification on the barbed wire fences. In light of all that I’ve seen, I run into the one and only souvenir shop of the JSA (yes, apparently even the most heavily-armed border on Earth can’t do without one).

Here you can take home a piece of the most closed off country: maybe a whiskey or stamps with the portrait of Kim Jong-il. I’m finally leaving the DMZ behind me, the most surreal place I’ve ever visited… But only 40km south of the border, in the city of Seoul, life is just normal. With over 10 million people, it is one of the largest cities in the world and a cool place to stop over on your way from Australia to Europe.

I’m staying in Hongdae, a student district with heaps of bars and restaurants. Even at night it’s still bustling with activity, the streets are crowded with students going out for a drink or late dinner. Shops and stalls as far as the eye can see promote their spicy street foods, glittery jewellery and ginseng facial masks.

Hongdae’s not only a cool place at night time but also on a Saturday (except for winter) when there is an arts and crafts market close to Hongik University where students sell their uniquely designed T-shirts, bags and paintings. But I also like the more traditional places of Seoul, such as Insadong. 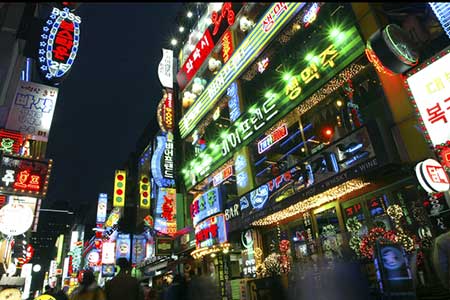 Walking through the streets of this charming shopping district, I have to keep in mind my already overweight luggage as it’s hard to resist all these hand-crafted tea pots and decorative fans. Insadong is part of Jongno-gu district, the oldest part of Seoul with many traditional wooden houses, palaces (including UNESCO World Heritage-listed Chandeokgung) and beautiful Jogyesa temple, overlayed by hundreds of multi-coloured lanterns.

A bit further south, in Jung-gu district, is another one of the highlights of my tour: Namsangol Hanok Village that displays houses (some of them authentic buildings, others rebuilt) of times long past. I like it because you can see how the commoners lived in Korea some centuries ago.

It’s a great place to have a “green tea latte” or some yummy Korean food. With its cosy neighbourhoods, historic temples and modern shopping streets, Seoul is a great place to visit. It’s easy to fit in a day tour to the infamous border about 40km up north, the DMZ. Just don’t forget some smart clothes.

Breaking barriers: The Unlimited arts festival is here to change the way we think, as the Paralympics kick off in London