The first recording of a festival was in the 13th century, when it’s said that men in masks threw scented eggs at passing ladies — with an interruption in the 1930s when, under the rule of Mussolini, Fascists banned the celebration.

Then in 1979 the Venice carnival was revived by locals, and since its rescue it has become an internationally renowned annual event, attracting hordes of tourists and Venetians alike every February.

The main attraction to the carnival has to be the many costumed characters in their theatrical garb. The combination of imagination and design by those parading is ultimately responsible for creating the dreamy, fantastical world of the carnival. 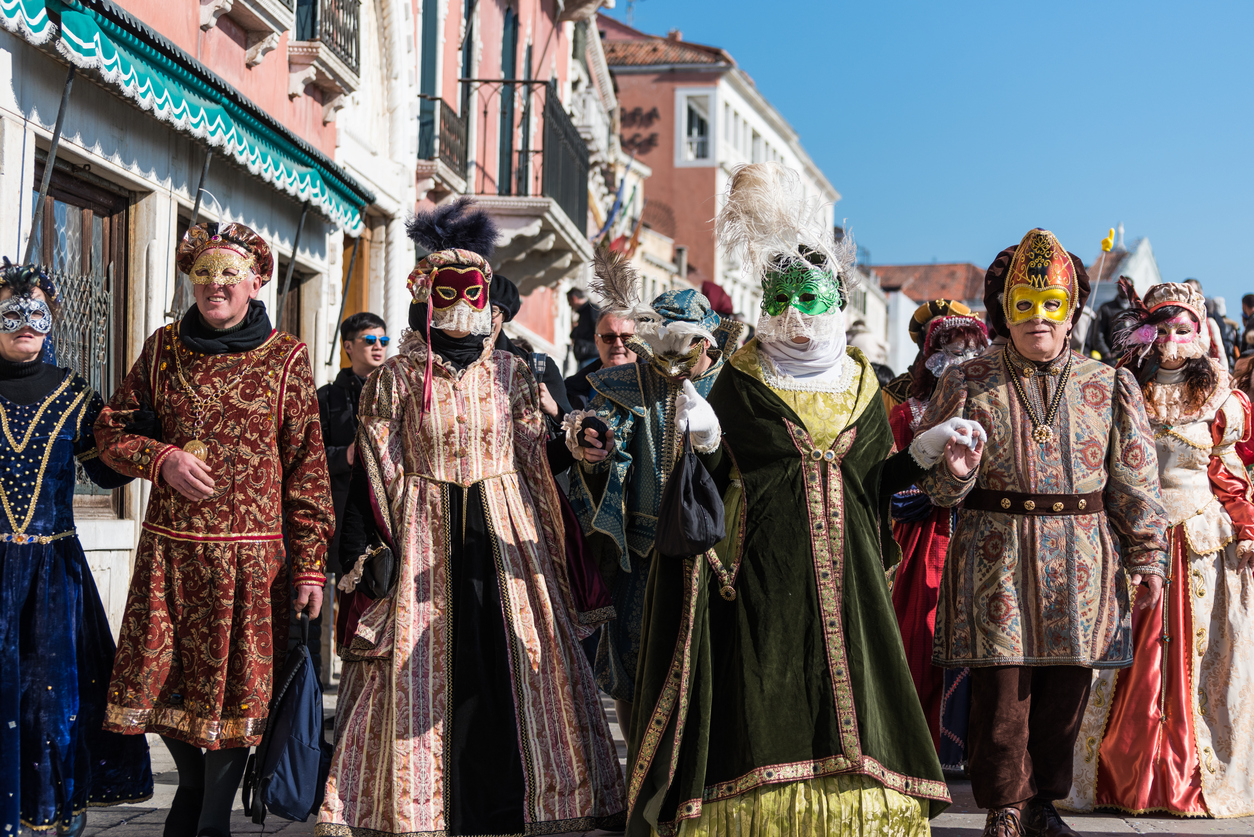 At times it feels like a souped-up fancy dress party, at others a bizarre ’80s music video, and while the mix might sound curious, the end result is an overdose of colour and drama set against the perfect backdrop of the old city. That, or a great excuse to show off.

As the carnival begins, the narrow streets of Venice slowly fill with tourists ready to ogle the best-dressed participants. Most visitors get into the celebratory spirit, browsing the many shops and stalls that sell finely crafted masks. Having chosen the one that best appeals to their inner Venetian, they then perform their own personal parade around the beautiful St Mark’s Square, incognito.

After my initial reluctance, I put my camera away, don my mask and get involved.

Time flies as I shuffle among crowds of excited people and soon night creeps up on the city. With darkness comes a choreographed lighting display flashing over the square, and as bands start up on nearby stages we’re suddenly tugged back into the 21st century.

In a bid to rest my weary legs I head towards the Grand Canal for pizza and a beer. Sitting in front of a canalside café watching the sun set over the city skyline, I feel privileged to have had the chance to learn some of Venice’s secrets — and share them with tourists and locals alike, strutting round like peacocks.

How to pick your mask

Many of the masks worn at carnival time depict characters from commedia dell’arte, a form of improvisational theatre which began in the 16th century.

The performances, which tended to revolve around the topics of adultery, jealousy, love and old age, involved a rotating cast of stock characters that would have been immediately recognisable to contemporary audiences.

Here are a few to look out for:

Abadea: a fool who laughs at nothing.
Arlecchino: also known as Harlequin, a wily servant.
Brighella: a cunning servant.
Il Capitano: a captain.
Il Dottore: a doctor.
Gianduiais: a well-mannered peasant.
Pagliaccio: a clown.
Pantalone: a greedy old merchant.
Pulcinella: a crooked-nosed hunchback.
La Ruffiana: an old woman with a shady past.
Scaramuccia: an unscrupulous adventurer and swordsman.

Running away from the circus: Animals to be banned from UK circuses