It’s ten years since I first travelled the Great Ocean Road on one of many backpacking visits to Australia. I remember it clearly enough to know that while the first east-west section was everything I had dreamed it would be – sweeping bends and hairpins hugging the coastline with stunning vistas round every one of them – the part from Apollo Bay was something of a disappointment.

It wasn’t so much the Great Ocean Road as the Great Inland Road that ended up at the 12 Apostles (the less said about how many Apostles there actually are, the better). Thankfully there is now a way to see that stretch of coastline but you have to do it under your own steam.

The Great Ocean Walk is a 97.9 kilometre trek split into eight sections with seven walk-in campsites en route. Which means there are seven more campsites than there are pubs, shops, rubbish bins or any of the other amenities we take for granted.

Everything you need on this walk you take in, and everything you use you take out. How you choose to split the walk is your prerogative, but this is my story…

After supping a lunchtime beer and consuming our last meal that would not come out of a packet we headed south from Apollo Bay. The first few kilometres are unremarkable and basically consist of walking out of civilisation.

After walking through Marengo Holiday Park and along a pleasant rural track the real fun starts (if you don’t think the next bit sounds like fun then flick the rest of this feature and forget about doing it. It’s not for you.)

The terrain becomes very rocky with fascinating formations. I’ve never been to the moon but this is what I would imagine it to be like, although with less gravity. It’s mostly easy going albeit with a fun scramble to negotiate the originally titled ‘The Blowhole’.

After a rather awesome beach walk we headed inland for a short, sharp and sweaty climb to finish off the day and our first night of camping. All the campsites follow the same pattern, with fantastic pitches elegantly sculpted into the environment.

Each site has a shelter and a compost toilet (often with exquisite views) with both edifices utilising sloped rooves to collect rainwater for use (don’t forget your purification tablets). 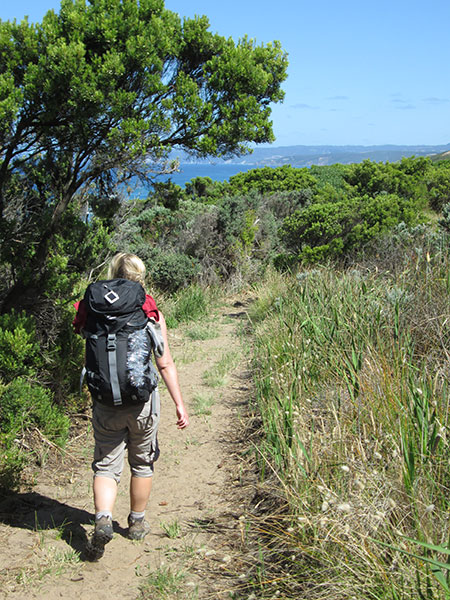 This is actually the dullest section of the walk as topography dictates it is inland and predominantly on established 4×4 tracks. My highlight was encountering a rather relaxed and sociable black wallaby.

The final short section brings you ever more tantalisingly back to the sea and a final descent to the picturesque Blanket Bay.

The walk from Blanket Bay climbs up along the cliff tops through coastal forests before you emerge to a breathtaking lookout spot. (There are so many lookout points with amazing coastline views I won’t mention them all as there won’t be room for anything else.)

There can be few better lunch spots in Australia. Crossing the inlet may involve getting your feet wet and then the Walk rises to the cliff tops again. Except we ignored the advice of the map and took the coastal path which isn’t recommended for hiking but was another encounter with mind boggling rock formations shaped by millions of years of sea action.

From the beach a short inland stretch connects you to civilisation as you walk alongside the road that leads to Cape Otway lighthouse. After being disappointed to not spot koalas earlier we found one hanging off a branch directly in our path. After eyeing us suspiciously he decided to hang out with us for a while which was an ideal way to chill out. 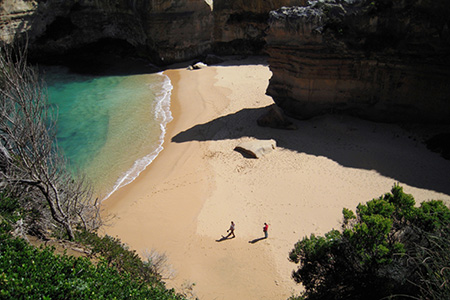 The first part of this section is the most densely populated, firstly with humans who are exploring the area round the lighthouse and then by cicadas.

If the torturers in Guantanamo Bay knew how much racket these little buggers could make they’d quickly drop waterboarding.

Where most of the beaches so far are rocky, Station Beach is an unadulterated stretch of classical sand and there was nothing but ourselves and our footsteps recording the route we had taken, before the track took us back inland for a pitstop at the Aire River campsite.

The walk heads up and back to the clifftops for several kilometres before descending down to a path that runs along the base of an escarpment offering a fascinating contrast between the cliffs to the right and the sea crashing on the rocks to the left.

The next inland section is merely a precursor to one of the highlights of the trek – a two-kilometre stroll on Johanna Beach.

Walking barefoot with a backpack is not something you get to do very often but it’s the easiest way to travel here.

A quick dip in the ocean and it was again time to walk past what we were now referring to as plebs’ campsites and to the GOW version perched atop Slippery Point looking back over the beach. 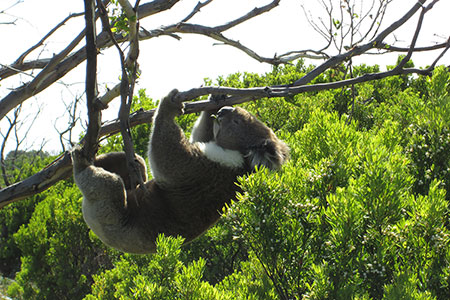 The first section is a pretty dull affair, inland 4×4 tracks enlivened only by a dummy pirate offering free chocolate standing sentry outside one of the several houses you pass.

After traversing Milanesia Beach the track becomes a great, tough bushwalk that makes a nice change of pace.

A big climb culminates in arrival at Ryans Den where an echidna welcomed us, although I don’t think he works full-time.

Section 7 – Ryans Den to Devils Kitchen (are they allergic to apostrophes?) (14.4km)

As we had some tide times to consider we were up bright and early for what was described as the most difficult section of the walk. I don’t agree but maybe it was too early for my brain to appreciate it. Anyway we hit Wreck Beach after a 366 step descent (Depending on which guide you read – I didn’t count ‘em. But there’s a lot.)

It’s not hard to imagine ships being wrecked on this hostile looking beach and the ships’ anchors still on display are testament to its destructive history. Our last rock scramble led to a climb up to the last campsite. Even if you don’t need to I recommend using the toilet. The view is awesome. 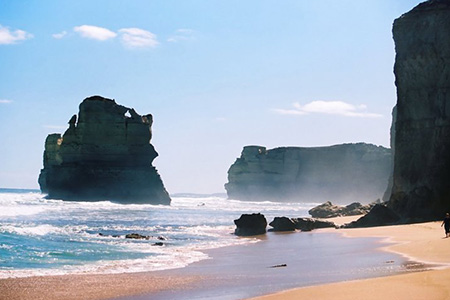 The long, straight path outlined on the map with no beach action suggested this might be a long, unremarkable and tiring walk to get back to the car we had left at the end before getting a cab to the start of the walk. In fact it was a brilliant culmination with a variety of terrain and countryside that proved to be an excellent finale.

The entire track is wonderfully signposted and the brilliant Great Ocean Walk lookout point is a suitable finish to one of the best things you can do in Australia and not have to pay a few hundred dollars for it. Don’t think about doing this. Just get on with it.

Asteroid mining company set to be unveiled by group of billionaires