The tabby cat strolled onto the Anfield pitch 10 minutes into last night’s game.

Looking completely at home the cat slunk around near goalkeeper Brad Friedel as Tottenham and Liverpool fans looked on.

As Anfield stewards tried to corner the moggy it skipped triumphantly across the pitch before wandering to the sidelines of its own accord. 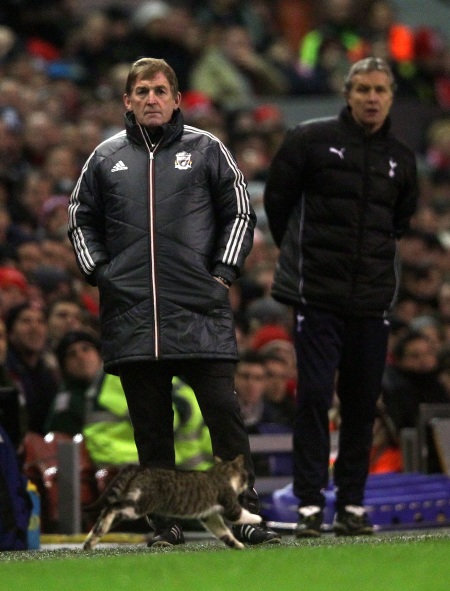 #catonthepitch! was instantly trending on Twitter and the cat’s invasion was arguably the highlight of a game that ended in a 0-0 draw.

“The most interesting thing to ever happen in football, ever,” Tweeted one (female) viewer.

“No goal tonight, no matter how good, will top this #catonthepitch!” said another.

“think it’s time for a cat nap, I ran my legs off tonight in true @Dirk_18_Kuyt fashion.”

And: “fernando torres reportedly jealous I got a bigger cheer than he has all season.”

Enjoying his five minutes: The Anfield Cat on Twitter

Another Anfield Cat – this one black and white – made headlines in 1964, running across the pitch during a match between Liverpool and Arsenal during the BBC’s first Match of the Day.