Policeman Kevin Mayer arrived on the scene at around 8am following an incident in which a man had stolen a backpack from another customer at the McDonalds restaurant in Florida’s Pompano Beach. Scroll down to see the video footage.

After attempting to handcuff Patrick Davis, 27, the police officer was thrown over onto his back with what was described as ‘super strength’ by the desperate thief. 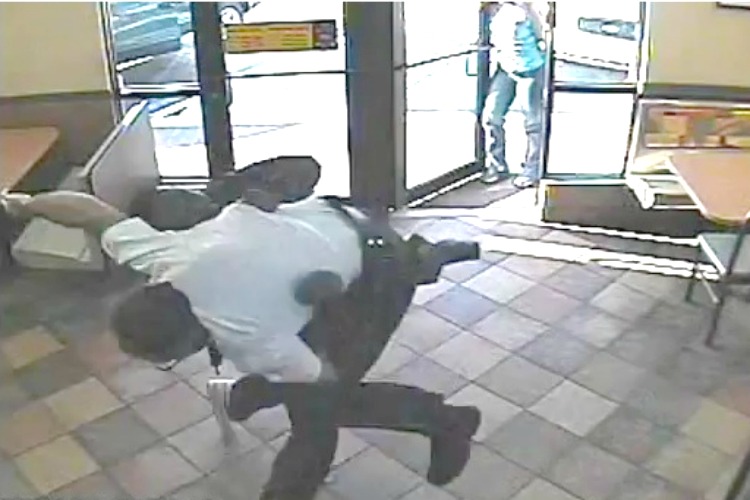 Three homeless men who were inside the restaurant then took it upon themselves to step up and help the policeman with his struggle. He’d lost his glasses, handcuffs and police radio in the scuffle.

They held the the man down, dragged him by his feet and handcuffed him. Even when the group eventually managed to get the crazed robber into the police car with the help of another police officer who arrived on the scene he struggled and kicked out the back window of the vehicle. It is presumed that Davis was high on crack cocaine at the time.

The three heroes of the moment were named as Peter Finch, Jose Ramos, and Carmello Maldonade, who live in a nearby homeless shelter. Davis has been charged with ‘battery on a law enforcement officer, obstruction with violence, criminal mischief, depriving an officer of means of communication, attempted escape, and robbery with a weapon’. He had two outstanding cocaine-related criminal charges outstanding.

See the CCTV footage from the McDonalds restaurant below…

Top 7 party venues in the world

Treatment of the week: Weekend Lashes