The Unipiper, otherwise known as Brian Kidd, is renowned in Portland, in the US state of Oregon, for playing the bagpipes while pedalling around on a unicycle. He found local acclaim through entering a competition called Great Talent, Fantastic or Otherwise (GTFO) back in July 2010. He came second in the competition, losing out to Arm Rotating Girl. I wonder what she can do? 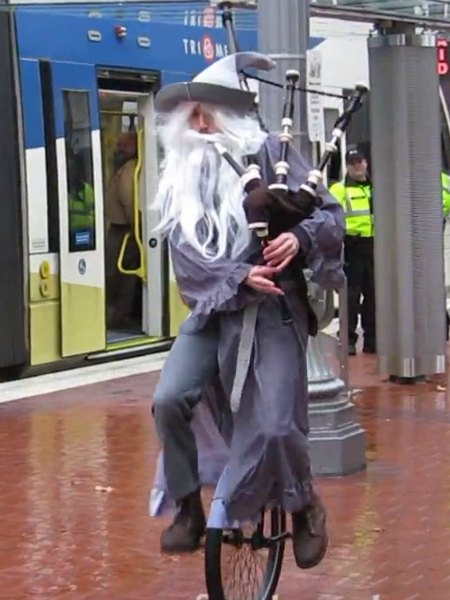 The Unipiper’s entry to GTFO was a video of him playing the Star Wars theme tune on his bagpipes whilst cycling round in circles.

Since then, the Unipiper has been performing to astounded passers-by on the streets of Portland, in a variety of costumes. At Christmas time he dresses up as Santa and performs Christmas songs.

“But, why the bagpipes?” I hear you ask. The Unipiper appears to be very proud of his Scottish heritage. Along with the bagpipes and the unicycle, one thing the Unipiper is known for, is his kilt. Yup, that’s right, Santa wears a kilt.

The Unipiper is now so popular in Portland that he has 7,081 ‘likes’ on his Facebook page.

Galdalf doesn’t wear a kilt, though. Obviously. He’s far too serious for that. The Hobbit: An Unexpected Journey hits cinemas in the UK on December 13th, and in Australia on December 26th.

Ian McKellen, who plays Galdalf the Grey in the film franchise, revealed yesterday that he has prostate cancer.

3 of the best arty bars: Impress your pals with a night out at one of London’s bohemian boozers

Landing aborted! Pilot too busy texting to land a plane 392 feet from the runway