According to the Russian Academy of Sciences, the meteor weighed 10 tons and was travelling at a speed of 33,000mph. It shattered between 18 and 32 miles above the Earth. Authorities are still tallying the damage. Several locals have caught the explosion on film.

“According to preliminary estimates, this space object is of non-technogenic origin and qualifies as a meteorite. It was moving at a low trajectory with a speed of about 30 km/s.” said Russian space agency Roskosmos.

An astonishing nearly 3,000 buildings were damaged in the city of Chelyabinsk, including schools and hospitals. 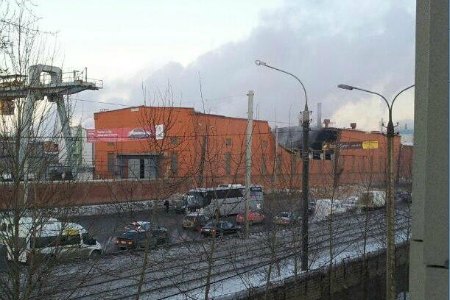 An image of a burning zinc factory destroyed in Chelyabinsk shared on Reddit. Scroll down for video footage via Russia Today / YouTube

According to the Itar-Tass news agency, some fragments fell into a reservoir outside the town of Cherbakul. The military spokesman also noted that saying that a 20-foot-wide crater was found in the same area.

Watch some of the video footage captured and uploaded to YouTube.

Hillary Clinton touches down in Perth ahead of Aussie business tour

The Black Seeds at Electric Ballroom