Visit Sarajevo, Bosnia and Herzegovina – top things to do

In Bosnia and Herzegovina’s capital, Sarajevo, holes in the road filled with red cement mark sites where civilians died in mortar attacks. These ‘Sarajevo Roses’ are among the few reminders of the war that raged here from 1992-95. Today, Sarajevo is a bustling, glittering city, full of “coffee freaks and party animals”, according to a local.

During the 1992-95 siege of Sarajevo, a 700m tunnel was dug to transport food, ammunition and manpower from the outskirts to the city centre. The Kolar family home by the city airport disguised one end of the tunnel, and a museum has been set up here. Besides two rooms filled with war memorabilia, you can walk the first 20m of the tunnel.

Explore Turkish Sarajevo’s warren of narrow streets leading off Bascarsija (dubbed Pigeon Square), which are filled with coffee shops, restaurants, and a bazaar. Mosques and minarets spike the sky and coffee is served in a copper pot, with a Turkish delight and a hefty caffeine kick.

Carnivores don’t have to look far for a feed in Sarajevo, where the smell of grilled meat wafts through the streets of the Turkish Quarter. Sample traditional food such as cevapcici (minced lamb or beef) and burek (pastry stuffed with meat or cheese). Veal crops up on a lot of menus, and if you don’t want to go hungry try bosanski lonac – a hearty meat stew cooked over an open fire. 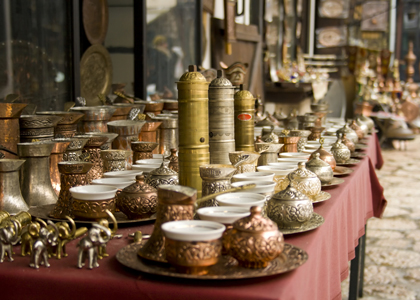 Get out of town

Explore the hills that ring the city and visit Jajce Castle and the ruins of a medieval village, before getting the best view in town at the Park Princeva restaurant. Stick to the roads unless with a guide as there are unexploded mines, but just 20 minutes from the town centre, the slopes used for the 1984 Winter Olympics are safe to ski.

WHEN TO GO: Avoid the chill from December to February, unless you want to ski.
GETTING THERE: Fly direct to Sarajevo. If you’re coming from a neighbouring country, buses or trains are a good option.
VISAS: South Africans need a visa. Australians and New Zealanders don’t.
CURRENCY: Convertible Marka. 1 GBP = 2.39 BAM.
LANGUAGE: Bosnian, Croatian and Serbian.
GETTING AROUND: The city centre is easily explored on foot but taxis are reasonable if you want to go further out.
GOING OUT: A beer is about 4 BAM a bottle.
ACCOMMODATION: Dorm rooms from 25 BAM and double rooms from 30 BAM.
GET MORE INFO AT: sarajevo.ba/en

BOOK A BOSNIA AND HERZEGOVINA TOUR

Class of the week – Kranking

Hard work for Martin as he eyes test cricket