A woman in a floral skirt and slippers is diligently sweeping the entrance hall of an elegant building overlooking Via Borsieri. As I walk past, trying to catch a glimpse of the lush inner yard, she grunts a dispirited “buongiorno”, staring at me with an expression conveying both curiosity and reproach. Perhaps it’s my insistent lurking putting her off.

You don’t expect people to stare in Milan, a city that is in general too busy to care (unless you’re not complying with its strict fashion imperatives). But I’m in Isola, a former working-class neighbourhood that seems to struggle to keep up with the pace of change ahead of Milan’s upcoming international fair, Expo 2015.

Isola looks like a quiet town rather than a district in Italy’s second-largest and most happening city. The name, Italian for “island”, refers to the farms, locally known as isole, that used to dot this territory. However, the Milanese like to think it refers to the geographical isolation that this neighbourhood, cut off from the rest of the city by train tracks on one side and a flyover on the other, has always enjoyed.

It’s a unique place, where people still shop at the baker’s and the butcher’s and where everybody is on first-name terms. But it’s also Milan’s new up-and-coming neighbourhood, currently at the heart of the most ambitious project of urban renewal the city has seen in decades.

Fashion boutiques, bistros and wine bars are opening everywhere in Isola, and just south of the neighbourhood several steel-and-glass skyscrapers and residential developments are being built. The magnificent silhouettes of the Palazzo Lombardia, the new seat of the regional government, and the Torre Hines, Italy’s tallest building, are already iconic presences in Milan’s skyline.

As I stroll down streets lined by hundreds of parked cars – it typically takes hours and a lot of swearing to find a spot – I walk past Art Nouveau buildings, former council houses (with pretty inner yards surrounded on each floor by balconies with railings), graffiti and a surprising number of shops where artisans have worked for decades.

Isola is a neighbourhood of people who make things. Taking greedy drags from a cigarette, a Sicilian carpenter who moved here in the late Fifties shows me his workshop, a messy room that smells like sawdust and is filled with old chairs and cupboards. Next door, a young man is lifting the shutters of a store where old lutes and mandolins are fixed. Unaware of the difference between the two instruments, I ask him about his job, but his laconic answers sound to me like a polite invite to let him go on with his work.

But still, in a city where furniture is inexorably linked with expensive designer brands, seeing authentic old botteghe like these is a rare treat. 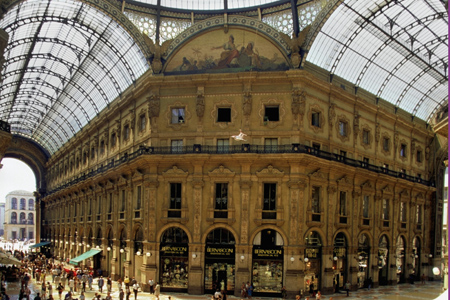 In Via Thaon di Revel, at number 21, past the beautiful church of Santa Maria della Fontana, I stumble upon a relic of Isola’s long tradition of handicraft. The Fonderia Napoleonica Eugenia is a mid-1800s foundry, and I manage to sneak in thanks to a complacent worker who is fixing the front gate.

I find myself in a red-brick building full of busts and bell templates and with a large hook hanging from the ceiling. The main door of Milan’s Duomo was built here, together with the equestrian statue of Vittorio Emanuele II that faces the cathedral. Nowadays, the space is host to concerts and art exhibits.

The stark contrast between the old feel of Isola and the shiny modern buildings around it is even more evident as I walk up the Cavalcavia Bussa, a flyover near the southern tip of Via Borsieri. Before sunset, I meet my friend Flavio for an aperitif. He’s one of the many young professionals who flocked to gentrifying Isola attracted by a soon-to-open new underground station and the plethora of hip new bars, eateries and boutiques appearing at every corner.

Sipping a mojito, I look at the skyscraper appearing at the end of tree-lined Via Borsieri. For a second I think about the nosy woman staring at me and the rather introverted character of the area’s residents and shopkeepers. Their neighbourhood is changing – they should prepare themselves for many more curious passersby in the future.

Getting there: Return flights from London to Milan start around £60 with easyJet

Budget: At Omelette & Baguette, the name really says it all. This recently opened cute bistro, with wooden chairs and large windows overlooking a quiet street, serves delicious omelettes and sandwiches. Leave happy and full for as little as a fiver. (Via Pollaiuolo 9,  tel. 00 39 02 6884687)

Mid-range; Factory workers used to dine at Trattoria da Tomaso. The family-run trattoria (mandatory booking for dinner) offers a range of simple and tasty Lombard recipes, in a rustic, no-frills setting. Places like this are hard to find in Milan. Full meals for just over a tenner. (trattoriadatomaso.it)

Luxury: Glamorous SkyLine, open for dinner, is located on the 11th floor of the Atahotel in fashionable Corso Como, with clubs and bars galore. Enjoy gorgeous views of the skyscrapers around Isola while tasting traditional recipes. Don’t miss the ossobuco, Milan’s signature dish. Expect to spend around £30.

Budget: Glamorous SkyLine, open for dinner, is located on the 11th floor of the Atahotel in fashionable Corso Como, with clubs and bars galore. Enjoy gorgeous views of the skyscrapers around Isola while tasting traditional recipes. Don’t miss the ossobuco, Milan’s signature dish. Expect to spend around £30.

Mid-range: A trendy cocktail bar-cum-eco-fashion-store, with an entrance covered in graffiti, Frida attracts
a young crowd that fills the garden every evening. Try delicious local beer Menabrea, or a cocktail with absinthe. Beers start at £2.40 and cocktails from £4 during happy hour (until 9pm). (fridaisola.it)

Luxury: It doesn’t get much better than this for music lovers. Renowned jazz club Blue Note is the only European affiliate of the New York institution, and offers live shows every day of the week, plus a great selection of cocktails. Beers start at £5.60; cocktails from £8. (bluenotemilano.com)

Budget: With simple double rooms with shared facilities starting at about £26pppn, Pop House is an ideal solution for budget travellers. Easy access to Isola and other areas of the city. (pophouse-milano.com)

Mid-range: To live like a local, book at Apartments Isola, a series of elegantly decorated and cosy apartments in the heart of the district on Via Pastrengo. Apartments for two people start at £65pn. Breakfast is available for an additional £12 per head. Two nights minimum stay. (isolapartments.com)

Luxury: Even if you are in Milan to enjoy artsy and alternative Isola, there’s no reason you shouldn’t indulge. At high-end hotel Maison Moschino, luxury knows no bounds, with rooms (starting at £138pn, with suites at £309pn) boasting sublime, fairytale-inspired designs. (maisonmoschino.com)

Strike Alert! Yet another Tube strike is pencilled in for Sunday