Visiting Egypt after the revolution

As dusk deepens, so does the crowd on the platform of Cairo’s Giza station. Like us, they are waiting for a train south to Aswan. Cairo has a reputation as one of the world’s most polluted cities – tonight, the low-lying haze catches the bright lights, bathing the station in a strange orange glow. “After 32 years, it took us less than three weeks to get rid of Mubarak,” Romany, my guide, tells me, referring to the seismic events that occurred earlier this year, when a popular uprising ended the presidency of Hosni Mubarak.

Cairo, an already chaotic city at the best of times, remains safe for tourists – there are specially licensed tourism police charged with protecting visitors – but the odd sign of heightened disorder is easily noticed. On the platform, there are a handful of policeman, identifiable by their white uniforms. They are there mostly for show and have no real power. They stand idly as a handful of young men clamber down on to the tracks and cross over to the opposite platform.

“When the police disbanded, people joined together in their own neighbourhoods to make sure there was no breaking the law,” Romany says, explaining that decent, law-abiding Egyptians have tried to keep the peace.

“There are people who want it to fail, who want us to think, ‘It was better under Mubarak’,” Romany continues. “But as long as Egyptian people do the right thing, and don’t just do whatever they want because there is no one to stop them, it will be successful. We just need time.” 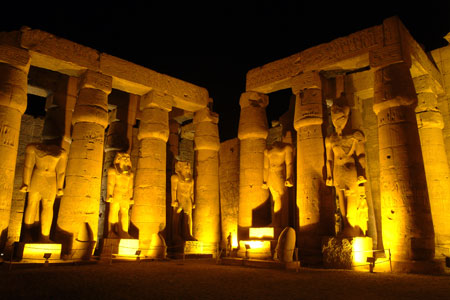 Any trip to Egypt would be incomplete without visiting the country’s most famous attractions: the Great Pyramids and the Sphinx in Cairo; the soaring temples at Abu Simbel and in Luxor and Aswan; and the ancient underground crypts in the Valley of the Kings.

The pyramids remain the iconic symbols of Egypt, giant, dusty monoliths rising out of the desert. They are spectacular, no doubt, but there are great structures all over the world – the pyramids continue to captivate because of what they reveal about the civilisation that built them. They were, of course, vastly more technologically advanced than any other population of the ancient world – the sophistication of engineering, the insatiability of their curiosity and their understanding of astrology, in particular, were so far ahead of the curve that it boggles the mind. And, more than any other sight, it is the Great Pyramids, silhouetted in the dusk, that inspire the appropriate wonder.

Their outer marble casings have been stripped away, leaving the dusty beige limestone exposed, but some of the shiny exoskeleton is still visible at their apexes. It requires only a short stretch of the imagination to picture them on completion – enormous monoliths, gleamingly smooth, soaring miraculously above the sands. To anyone who encountered them, they must have seemed evidence of alien life; they were, and still are, unlike anything else.

At the feet of the pyramids, locals do their best to hawk their wares. Since the Revolution, the tourism economy has become straitened – fewer tourists means fewer customers for the guys who rely on selling knick-knacks, postcards and camel tours for enough Egyptian pounds to get by. At some spots, there are hordes of them – beseeching you to look, to buy. It’s easier to just hand them a few pounds – worth so little to tourists – but the drawback is that earning a living at these tourist sites deters the youngest hawkers – some are seven or eight years old – from going to school.

The Valley of the Kings is different again – built into the west bank of the Nile river, near Luxor, the crypts of some of Egypt’s most revered rulers have been immaculately preserved. While the pyramids, for all their grandeur, are washed out and have taken on the colours of the surrounding desert, the tombs in the Valley of the Kings more resemble a newly painted children’s bedroom. The bright white walls show little sign of wear and tear, despite being thousands of years old, and the remarkably intricate hieroglyphics, covering the walls from floor to ceiling, appear to have lost none of the rich scarlets and sky blues.

For sheer majesty, for sheer opulence, the enormous structures of Abu Simbel are equally breathtaking. They were originally carved into the rocks near Aswan but were broken into 20-tonne blocks and relocated in 1968, making way for the sprawling dam known as Lake Nasser.

The facades of the temple are among Egypt’s most elegant, most recognisable attractions – the four 20m-high statues paying tribute to Ramses II, one of Egypt’s most revered pharaohs. And, make no mistake, there have been plenty of those.

It is believed that the original temple was positioned so that, on two days of the year – Ramses’s birthday and coronation day – the rays of the sun would penetrate the sanctuary and illuminate the sculptures on the back wall, except for the statue of Ptah, the god connected with the underworld, who always remained in the dark.

The Nubian Dream, our felucca, zigzags its way north along the Nile, bearing us from Aswan toward Luxor. A felucca is a small sailing boat and, in Egypt, tourists ride in comfort, on mattresses covering the deck and protected by shadecloth. There are other ways to travel the Nile – on giant cruisers, which are essentially floating hotels – but the felucca is the most authentic.

The crew have grown up on the Nile, working the boats, navigating the waters. The men on the Nubian Dream are obsessed with Bob Marley – accordingly, a Jamaican flag hangs from the felucca’s mast. The banks of the Nile are lined with farms – this is fertile country, a long way removed from the dry heat of the desert – giving way to lush hills that tier their way all the way to the horizon. 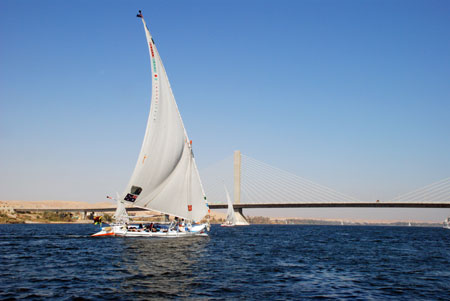 Periodically, we pull over to swim at secluded spots, where the banks of the river are lush with greenery, where waterholes stretch out for miles and local cattle slake their thirsts. In the evening, when the Nile’s waters catch the half-light of the setting sun, we dock a few yards upstream from a terracotta village, where the inhabitants are just finishing their day’s work – they have been working their crops, selling their trinkets, tending to their livestock. Their fields are nestled immediately next to the Nile – as we walk from our felucca, we are joined by a throng of women with bundles of sugar cane under their arms.

We dine at one of the local houses – it is more of a walled compound, capable of accommodating an extended family and a handful of animals. The food is simple but delicious – fresh olives and hummus, followed by spicy chicken wraps, or shwarma, and some grilled pigeon. In these parts, pigeon has a certain reputation – it is known colloquially as “the Egyptian Viagra” and is traditionally served as part of a wedding banquet.
The food is barely finished before the water pipe is produced. Mustafa, the man of the house, who must be
in his sixties, has the thickset build of someone used to manual labour. He hikes his plain grey galabeya – the standard-issue smock – up to his knees and begins expertly preparing the shisha.

Darkness has fallen now, but the compound is well-lit. The women sit huddled in the corner, offering temporary henna tattoos. The village around us has shut down for the evening – there is no noise of traffic, or shouting from people wandering the streets. It is silent, except for the bubbling of the shisha as Mustafa sucks on the mouthpiece, causing the tobacco to light up. He leans back, eyes closed, and exhales, filling the night air with thick, perfumed smoke.

After the shisha is finished, we slink back to the boat, which rests idle on the water. The crew have already hung a thin gauze around the deck to keep the mosquitoes out – they’re out in numbers, buzzing noisily along the water’s edge. After bedding down, sleep comes easily – the felucca’s rhythm, as it rocks gently on the Nile’s night-time tides, working brilliantly as
a silent lullaby.

The adhan – the call to prayer – rings out above the hubbub of the station. It is the perfect soundtrack – such a haunting melodic incantation that even a wretched unbeliever cannot help but appreciate its rich, sonorous sound. There is a transcendental timelessness about it, an enchanting lilt which seems to make the rest of the world move more slowly.

A passenger train clatters into the platform. It’s not ours – we want the next one. Good thing, too, as it’s packed. Young men in jeans and polo shirts do their best to squeeze through the doors, but as many are turned away as manage to make it on board – there are plenty more hanging off the backs of the carriages. Through one of the windows, four cadets are visible, sharing a four-seater booth, with a deck of cards splayed on the table in front of them. One of them catches my eye.

“Ah, Australia,” he nods, smiling, his arm resting against the open window, as the train’s engine whirs into life once again, its axles straining as it begins to pull out. “Welcome to Egypt,” he adds, with a wave, before the train eases away, its noise hanging in the air behind it as it disappears into the uncertainty of the warm Egyptian night.

WHEN TO GO: Stay away during the summer – it’s too hot. Seriously, when it’s 46 degrees, you don’t want to be there. But the months either side of summer are fine – still warm enough to enjoy but cool enough to be able to travel in relative comfort.
CURRENCY: £1 = nine Egyptian pounds.
ACCOMMODATION: It depends where you stay but plenty of plush resorts are keen to fill their rooms at the moment, so you can take advantage of some exceptional prices along the Nile or in the Red Sea resorts.
SEE: egypt.travel
GETTING THERE: Fly from London to Cairo with flybmi.com, British Airways (britishairways.com) or Egypt Air (egyptair.com). Return flights cost from £308 with flybmi.com.

Tom Sturrock travelled to Egypt with On The Go Tours. Group trips to Egypt range from six to 17 days with prices starting from £329. All group tours can be amended and upgraded with a raft of bolt-ons and excursions. For more information, see onthegotours.com or call 020 7371 1113

London 2012 Olympics: Businesses should give staff longer breaks during Games