Volunteer holidays in the UK: From digging for Roman ruins to renovating an Iron Age hill fort

Imagine getting back from a week’s break and your colleagues ask how your holiday was.

“Fine,” you casually say. “I uncovered priceless ancient Roman coins.” Or, “I did a little upkeep on an Iron Age fort.”

Beats getting smashed in Magaluf, doesn’t it?

It’s one thing to enjoy a trip roaming England’s green hills, strolling down canal paths or exploring pretty grounds, but volunteering holidays allow you to really be a part of their history.

Not only will you be out in remote and wild parts of the country, you’ll learn crafts as diverse as stonework, archaeology and canal restoration the best way possible – on the job. Get stuck in. You could be the first person in 2000 years to uncover evidence of the Roman way of life at this archaeological site in Exeter, Devon.

A geophysical survey was done in 2011 that showed there is likely to be fascinating evidence of a Roman settlement here, so there will be lots to learn about their ancient way of life.

You’ll be helping to excavate the site and recording finds, which could include pottery, coins, tools, and other Romano-British objects.

Data collected during the excavation will be analysed by Exeter University and the results published in archaeology journals.

More: The dates and prices of this 14-day dig are yet to be confirmed, but keep an eye on the website for updates. Accommodation will be at Exeter Uni’s Streatham Campus.
earthwatch.org Learn the ancient skill of hedge-laying in West Dorset.

You’ll be spending a week under the guidance of experienced rangers, helping to preserve the beautiful environment.

Dorset’s coastline is part of the Jurassic Coast World Heritage Site, and you’ll have more than enough time to ramble across the surrounding countryside’s rolling hills and wide valleys when you’re not working.

Being part of the long and historic tradition of hedge-layers, who have helped keep this part of England so
well-preserved for centuries, is quite a kick.

More: This project takes place November 17-24, and bunkhouse accommodation is included in the £145 fee.

Cissbury Ring is the largest Iron Age Hill fort in Sussex, and it’s in need of some serious TLC. Fancy helping restore this great site to its former glory?

The area covers more than 65 acres and dates back 5000 years. Your part will be to remove scrub and old fence lines from the ramparts (the wall), which will clean up the fort, improve the habitat of rare butterflies and preserve the remains of Neolithic flint mines in the area.

More: Taking place between November 17-23, bunkhouse accommodation is included in the £135 price.
nationaltrust.org.uk If you don’t mind getting dirty, a canal restoration break may be just the thing for you. The Waterways Recovery Group runs canal camps all year, but you can sign up now for Christmas Camp on the Uttoxeter Canal.

Instead of sitting around watching old Bond films and eating turkey sandwiches, you could be learning everything there is to know about the UK’s canals.

There will be all sorts of jobs to do, like demolishing old stonework, scrub-bashing, bonfires, learning to lay bricks and driving a digger.

More: Bring a sleeping bag, as you’ll be crashing in nearby accommodation provided in village halls and sports clubs. 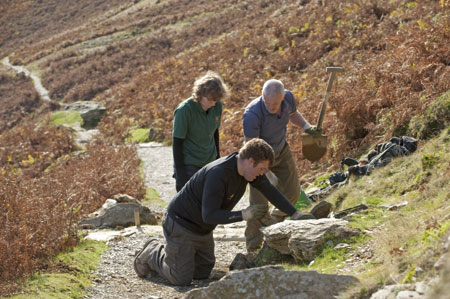 The Calke Abbey is a baroque mansion dating back to early 1700s.

The grounds have dry stone walls which are in dire need of repair – that’ll be your job, as well as fencing the surrounds to keep deer under control and helping to improve the woodland habitat for wildlife, such as dormice.

Then kick back with a cuppa and a bonfire at the end of the day.

The Rocks to rock on Oz Day