Perhaps you’d use all three. The 24-year-old – by turns brilliant, suspect, sublime and thuggish – is a divisive figure for rugby fans.
The Tokoroa, New Zealand-born fly-half was in the media spotlight again last week after letting his fingers do the talking.

As is his wont, Cooper took to Twitter to criticise Australia’s set-up, stating he was only allowed to play his exciting natural game in Super Rugby for Queensland.

To top it all off, he then strongly insinuated he might join close friend Sonny Bill Williams in the NRL next season. “I don’t want to be involved in the toxic environment, and that’s how it is at the moment,” Cooper said of the Wallabies.

But his Queensland Reds chief executive Jim Carmichael hit out at Cooper’s use of the microblogging site, saying: “I’m fed up, to be honest. Quade is making silly comments that do damage to our code.”

And former Reds and Wallabies coach John Connolly said he suspected Cooper, currently out of the Wallabies squad due to a knee injury, had made his position in the national team untenable.

Seems like it’s just another crazy month for Cooper. So, in honour of this polarising figure, we’ve remembered some of his more controversial moments.

Cooper first hit headlines for the wrong reasons when he was accused of burglary in 2009. Police alleged a Gold Coast apartment leased by foreign students had its door kicked in before being relieved of a couple of laptops.

Cooper, who’d been boozing at a buck’s night, told police his memories of the evening were hazy.

There were suggestions he had been under the influence of Wallabies-approved sleeping pills, but this was strongly refuted by the up-and-coming star.

He pleaded not guilty and the charges were eventually dropped.

After earlier being disciplined for an altercation with a taxi driver and then fined for taking part in a St Trinian’s-like food fight at a team hotel, the Australian Rugby Union felt Cooper needed some help, so ordered him into counselling. 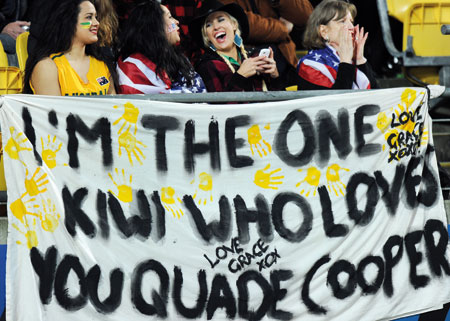 Mid-game, Cooper cleaned McCaw out of a ruck (legally), much to the NZ number seven’s displeasure.

Then, when James O’Connor plunged over for the Wallabies’ winning try late in the game, Cooper arrived on the scene to single McCaw out.

He shoved the prostrate All Black leader in the head as he tried to get up, and then delivered a tirade of abuse.

Fans figured it was a one-off, but the baiting continued into the 2011 Super 15 season. It came to a head that year in another Bledisloe Test, this one in Brisbane, when Cooper launched a well-directed knee into the face of McCaw, who was lying on his back.

New Zealand lock and enforcer Brad Thorn immediately tried to dispense some justice, but the Wallabies number 10 was protected by his forwards.

Despite the incident appearing to be deliberate to many, Cooper was cleared of any wrongdoing by a judiciary. With the World Cup looming, he was considered lucky.

2011: Villain in his own pantomine

Due to his treatment of McCaw, Cooper endured a hostile reception from Kiwi crowds when he arrived in NZ for the World Cup. “Hide your laptops; Quade’s in town,” one banner proclaimed.

The playmaker was branded ‘The Tokoroa Turncoat’ and then voted public enemy number one by the nation’s media. Such was the vitriol dished out by fans and media, Cooper’s NZ-based granny was forced to defend him.

The player, though, was cocky and unrepentant.

“I hope so,” he replied to questions about whether he expected hostility from Kiwi crowds.

They didn’t disappoint, booing and jeering every time he touched the ball.

However, Cooper was made to pay for his smugness in Australia’s group match loss against Ireland, exposed as a flat-track bully who couldn’t operate unless his forwards were winning the battle upfront.

Then, in the semi-final against the All Blacks, Cooper blew his lines completely.

He began the game by sending the ball over the touchline from the kick-off, made a series of horrid blunders and was crash tackled into touch in the final play, all to the noisy delight of the home crowd.

No one begrudges players a drink, but Cooper seems to go a bit crazy on the turps.

In 2010, he and teammates Kurtley Beale and James O’Connor were allegedly involved in a drunken fight outside a restaurant in Paris.

Cooper and O’Connor were believed to have ganged up on Beale in a late-night scuffle in the lead-up to the season-ending Test against France.

In 2011, despite supposedly looking after himself after injuring his knee in the World Cup third/fourth play-off against Wales, Cooper was in trouble again.

He was banned for six months from all three bars in Amity Point, Queensland, after a scuffle broke out at Stradbroke Island Beach Hotel on December 30.

And, even after all that, Cooper was again investigated by the Australian Rugby Union in June after seemingly getting involved in another altercation.

He was alleged to have grabbed the mobile phone of an onlooker to a fight between Beale and a Brisbane hotel patron, smashing it against a wall.

No one was ever charged. Maybe going under the wing of Sonny Bill Williams, who’s teetotal, wouldn’t be such a bad thing for Cooper after all. 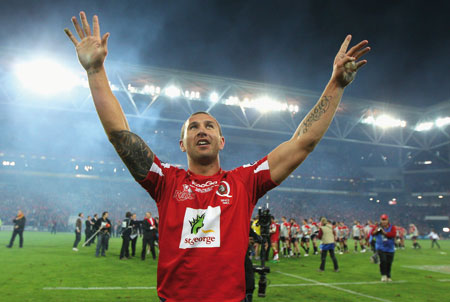 A different league Cooper a convert?

Any code-switch rumours regarding Cooper have always been given weight due to him being managed by Khoder Nasser, the man who also does business for league re-convert Sonny Bill Williams.

Last year, Parramatta offered a reported AU$1.5m (£965,000) over three years, however Cooper signed a one-year deal with the ARU.

But Cooper has now delivered a one-fingered salute to his employer, who he is still negotiating a contract with, stating his desire to play rugby league.

He said it would be a “massive achievement” to play with Williams, who encouraged his mate to switch. “We’ve definitely had a chat about it and it’s more about playing with each other,” Cooper said.

“It’s something I’d really like to do in the future.”

Kiwis coach Tony Kemp said he would be more than interested in luring Cooper to the Kiwis should he turn his back on the 15-man code.

Christmas albums of the year