Watch out for the crocs in Kakadu

Before coming to Australia, three commandments were handed to me from on high – by my Mum, in other words. Firstly, never mention Australia’s convict past. Secondly, never be coaxed into a debate about any sport in which Australia and England compete – because, being English, I would never win – and thirdly, and most importantly, never, ever sample the notoriously dangerous Aussie bush. Not because I might catch something nasty, but because something nasty might catch me.
It’s amazing this continent was ever settled considering the number of lethal creatures that can bring a swift end to an otherwise merry day. Toxic jellyfish, man-eating sharks, and venomous snakes are all beasts best avoided, but I was on the search for Australia’s apex predator, a killer so perfect it has cheated evolution for 200 million years. I was heading to Kakadu National Park in search of the infamous saltwater crocodile. 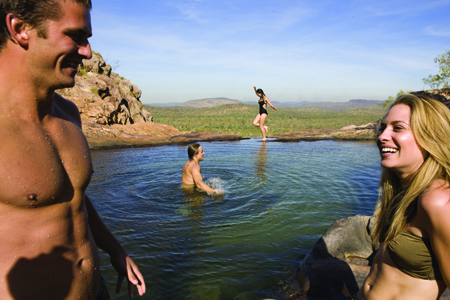 Few places rival Kakadu for wildlife. The park has more species of lizard than the whole of Europe, is home to 2,000 species of plant and 10,000 species of insect, and at the end of the dry season in October, the park becomes a bird nerd’s paradise, with more tits, cocks and boobies than a Jenna Jameson flick.

I head east from Darwin in a 4WD filled with tanned Scandinavians, past termite mounds, road trains and a very lost croc yawning lazily by the road side. At Mamukala bird sanctuary, our guide, Adam, introduces us to magpie geese, black crested cockatoos – worth a tempting US$40,000 on the black market – and a pair of brolga; the symbol of the Northern Territory. All very well, but we’re looking for killers, so in a storm of bright red dust we shoot across to the Mary River and board a tiny tin-can vessel for a voyage into the heart of darkness.

I settle into a gentle meander up the mirror-flat billabong, bumping into the park’s beautiful but safe animal and plant-life; giant lily-pads, cute wallabies, and mangroves filled with jabiru and darters. I’m itching to see a croc when our captain, Chris, begins his commentary.

“Freshwater crocs are endemic to Australia and are relatively benign, attacking only when provoked. Salties, like that one there, however, are different,” he says, casually pointing to a violent eruption of bubbles off the port bow.

“Those monsters are the largest reptiles on this planet. They can weigh 1,000kg, grow up to seven metres in length, far longer than this boat, and will attack without provocation.”

I realise then that I’m breaking the third commandment and, had I been in the water, I, too, would have been blowing bubbles.

Before you can moo

Although threatened by extinction in 1971, crocodile numbers are again on the rise and the Mary River is full of them. To my right, two salties fight over territory. In front, a four-metre croc warms itself on the bank. To my left, a row of freshies line up like tree trunks in the shallows. We’re surrounded.

“A saltwater croc can happily snatch an 800kg buffalo from the banks of a river and drag it into the depths before it can moo,” Chris claims, “and the pressure in its bite is greater than that in the brakes of a jumbo jet.”

What chance would I, an 80kg man, have, sitting in a boat just inches above the water? I have seen crocs on the Adelaide River leap three metres out of the water, so when a fresh set of bubbles disappears under the boat, I know we should move on. And luckily, we do.

Kakadu is World Heritage-listed for both its natural and cultural attractions, so after returning to terra firma with all limbs attached, I head east to Ubirr, one of Australia’s best and oldest rock art sites. 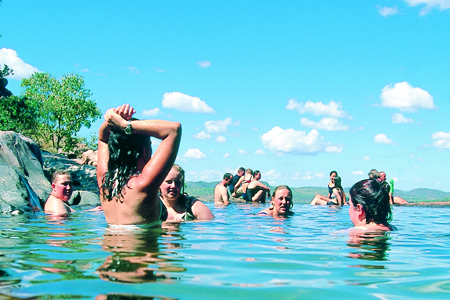 The area has been inhabited for 50 millennia, and is home to over 5,000 rock art sites, some of which date back 20,000 years. The walls and caves are wallpapered with amazing mouth-sprayed stencils and X-ray drawings of goannas and barramundi in ochre reds and golds. It’s a fantastic introduction to the culture and traditions of the local Aboriginal people, who only regained ownership rights to the park in 1976.

The day ends sublimely, drinking in the views over the termite mounds and wetlands of the Nardab floodplain – where parts of Crocodile Dundee were filmed – across to the cliffs of Arnhem Land, until the heat leaves the sky.

I head to the beautiful paper bark swamps of Yellow Water, where crocs inch silently through marble flat waters to watch a sunset burnt red by the smoke from distant fires.

At 20,000 square kilometres, Kakadu is as big as Wales, and even if you cover every inch of road and track, you will still see less than one per cent of the park.  It takes two hours to meander 60km along dry creek beds to Twin Falls, where I board a boat and sail through a burning red canyon on a creek filled with barramundi and turtles. The canyon ends where the falls crashes into a crystal-clear plunge pool (no swimming allowed) by a beautiful white-sand beach. True Australiana: beautiful and remote, yet ultimately lethal.