After that I was certain something was amiss, or my time machine was working perfectly. Turns out I had wandered into Madame Tussauds, the latest addition to Darling Harbour’s already impressive repertoire of tourism sights.

Having never been to a Madame Tussauds before I was pretty much expecting to see Tom Cruise, Nikki Minaj and Bill Clinton.

Boy, was I surprised. Around 60 per cent of the wax figures in the Sydney Madame Tussaud’s are Australian, and they come from all points in history too.

From the beginning of the colony and up to modern day sports figures, you’re bound to recognise someone here. If not, you can brush up on your trivia facts here, and be prepared to wow your friends the next time you see these figures on TV.

As incredibly real as the wax figures are, you’ll be delighted to hear that Madame Tussauds are working on the next step in replication technology. There is one figure on display right now that is made of silicone to create an infinitely eerily realistic figure. Go ahead, tug on that ear lobe, it’s as real as it gets. I won’t say which one. Just test every ear lobe. You’ll know when you find the right one. 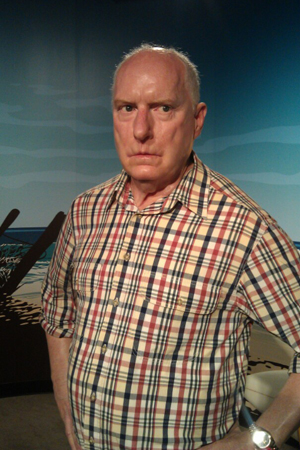 I was pretty content to just meet the wax counterparts of my favourite, and the occasional “who the hell is that”, celebrities and famous figures, and even those who fall into categories of their own (Alf Stewart, anyone?). But when they threw in the ‘behind the scenes’ section, I knew it was my lucky day.

The process of making a wax figure is apparently really expensive and time consuming (who knew?). Most figures cost about $220,000 and take roughly three months to make. I had expected to be able to steal Ghandi’s wig, but each hair follicle is inserted manually. Shame.

Madame Tussauds is the people zoo, conveniently located between Wildlife Sydney Zoo and the Aquarium. If you’re new to Australia then it’s a great introduction to our historical and current figures.

If you’re a local then how else are you going to find out if you’re taller than Julia Gillard? It might be an empowering experience, or humbling. Either way, Sydney’s Madame Tussauds has earned a well-deserved place in the Darling Harbour sightseeing circuit.