We experience the Running of the Bulls in Pamplona

Pamplona, Spain, 7am. It’s cold and my sangria-splattered white costume is sticking to my body. Hundreds around me wear the same expression I’m trying to muster: staunch commitment in the face of fear.

As if to further twist the thumbscrews of tension, TVs beam the gore of yesterday’s bull run. It seems the occupants of every second-level apartment want to let us know exactly how crazy we are and what our fate shall be should we fail to navigate the run properly. I hate them.

At street level, newspaper vendors hawk a front page plumping a blow-by-blow sequence of a man with a bull’s horn ripping his skin, complete with close-ups of his face contorted in pain and confusion. This is getting real.

Then, 10 minutes before the run, the crowd suddenly melts. Only a smattering of mostly non-Spanish-looking fools are left. I ignore the smugness of those in safety and move on. The trudge towards the landmark known as Dead Man’s corner seems to take forever. 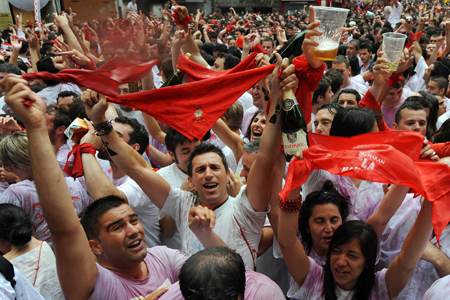 Survival of the fittest

Before I know it, the sharp shot of the first cannon has fired. Some run already. Having absorbed the advice of every ‘expert’ I’ve talked to, I hold firm. Until the second cannon. The crowd’s nervous tension is released as they take off and I now realise what fear looks like.

It appears in front of me as a young man who stumbles and trips. Fool. As he tries to mouth “help”, I vault him and carry on. This is pure fight or flight – every man for himself.

The roar of the crowd grows louder and the ground shakes as the purpose-bred solid Spanish bull hurtles along the course. They’re coming. People push and shout and scramble as they try to save their own skins.

The smell of fear

Some brave souls attempt to touch the bulls. Not me. I get as far away as possible but am near enough to smell them as I smash my elbows into the guy trying to push me into their path. Eventually, they are too fast and thunder on. The crowd chases.

As we turn a slight bend we’re hit with the dark side of Running of the Bulls. A man in his forties lies groaning and twisted as paramedics run to his aid. Poor bastard. There’s no time to stop though. The voice in my head warns me that there may be a stray somewhere behind. And I believe it. 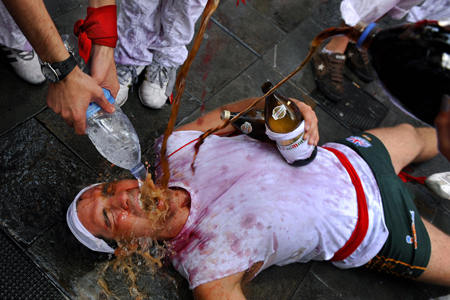 Grab a bull by its horns

Inside the relative safety of the stadium, everyone is jumpy as they wait before a hungry crowd, eager for more action after watching the run on a big screen. Sadists.

Baby bulls are released in the arena to cause chaos. While not as terrifying, they still inflict injury on the mostly Australian, mostly alcohol-affected crowd. The spectators politely applaud when an amateur matador flukes an avoidance of the charging beast, and laughs heartily when another is bunted off their feet.

A foolhardy Aussie breaks the rules and grabs a bull by the horns. Bad move, buddy. The spectators boo, and eight lads emerge from the throng to administer some Spanish street justice. I bet he’s thankful the alcohol in his system has acted as an anaesthetic.

One of his compatriots, a pretty blonde, is repeatedly trampled by a yearling. She stumbles to the paramedics, but they don’t seem to care. At least she has a one of a kind souvenir and a great tale to tell her grandkids.

Finally, with the bulls dealt with, and the crowd’s appetite for human blood satiated (they will still feast on a bullfight later), we can leave to share war stories over many glasses of Sangria. The more inebriated boast they will run again tomorrow, but for me, the largest shot of adrenaline I’ve ever had will keep me going.

A leather jacket and a pub story about how I wasn’t even scared at Pamplona will be the closest I get to bull for a long time. 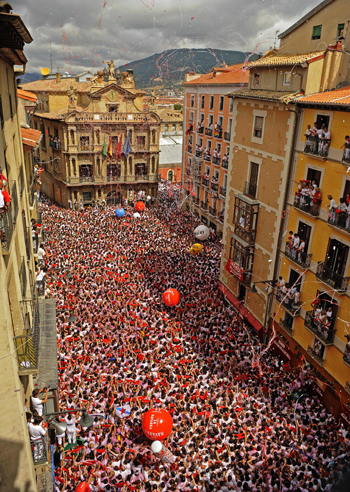 US laws and culture