Pamplona’s Running of the Bulls: travel and survival guide

Every July, the Running of the Bulls takes place in the Spanish town of Pamplona as part of the Fiesta de San Fermín.

The event basically involves nutters (mainly tourists!) legging it through the streets in front of a herd of angry bulls. The bull race stretches from the corral at Santo Domingo where the bulls are kept to the bullring where they will fight that same afternoon.

It’ll be the adreneline rush of your life but you need to keep your wits about you as people do get injured. Read on before you brave the bulls! 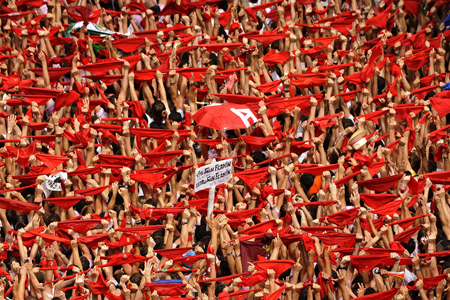 Essential information on Running of the Bulls in Pamplona

WHEN TO GO: Fiesta de San Fermín is held from July 6-14. The opening ceremony is at noon on July 6. The bull run is at 8am every morning, and six bulls are brought back to fight a matador in the arena at 6.30pm.
GETTING THERE: Fly to Bilbao, Barcelona, Madrid or Biarritz and catch a train or bus to Pamplona. Or fly there from Madrid or Barcelona.
GETTING AROUND: Buses run all night from all areas of Pamplona to the city centre.
VISAS: South Africans will need a Schengen visa.
CURRENCY: Euro. 1 GBP = 1.18 EUR.
LANGUAGE: Spanish/Basque.
ACCOMMODATION: Rooms in Pamplona get booked out early; there are campsites outside of town; others make the journey from Bilbao, San Sebastian or Zarautz.
FOR MORE INFO: sanfermin.com