The feathery mash-up that is Notting Hill Carnival and Clapham Common’s electro party, South West Four, are not your only options for the bank holiday. In fact, if you venture off the weekend’s traditional routes of mayhem, London will reward you.

Verbalesque, an all-day party at The Lexington on Monday, August 27 (2-11pm; tickets £5), is undoubtedly the most rock’n’roll way to spend your Bank Holiday.

Hosted by post-punk legend of the Eighties and Nineties, hellraiser-turned-poet, Lydia Lunch, the party will be a mad whirl of performance, music and booze.

Downstairs in the Bourbon bar, the Tin Tone Army, a 15-strong squad playing handmade tin guitars, will cause a absolute ruckus on their converted biscuit tins.

Upstairs, French-Australian female trio We Are Birds Of Paradise and New South Wales’s Steve Smyth will perform while a man in a diving suit hands out shots of rum.

Drifting around the animal-skull-covered, flock-wallpapered venue, curator Lunch will be master of ceremonies, announcing bands, performing songs and spitting out spoken word.

Lexington owner, Stacey Thomas, who hails from Perth, has no qualms about recommending Verbalesque as the best way to spend your treasured long weekend.

“I’d avoid Notting Hill Carnival at all costs,” she says. “This will be a lot cooler. It’ll be really different to Notting Hill, though; much more rock ‘n’roll with a burlesque-indie vibe.”

With rumours of some big names dropping in to play with the Tin Tone Army, a mouth-watering choice of American craft beers and, if the weather hold out, a BBQ, who are we to argue? Get amongst it. 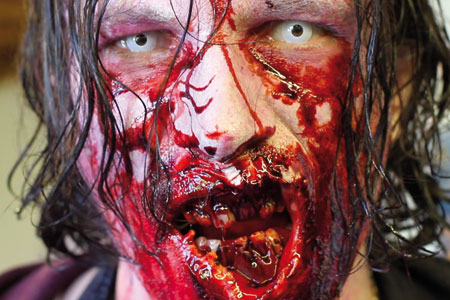 Under the radar in another sense is the UK’s biggest horror festival, Film 4’s FrightFest, which takes place over five days (Aug 23-27; weekend day passes £54), with the Empire Cinema in London’s West End invaded by worshippers of all things horror.

“Saturday will be the world premiere of the neo-giallo [a genre of mystery-paranoia-slasher horror] Tulpa,” he says. “I adore director Federico Zampaglione and his superstar wife Claudia Gerini and can’t wait to introduce them on stage.”

The festival will be chocka with hardcore horror film fanboys and girls from all walks of life, aged from 18-80, about half of whom will have weekend passes to sit through several days of terror. It’s a welcoming scene, though.

“When you get the horror bug, it clings to you forever,” Jones says.

“Someone told me that they wish they could see every horror release with their FrightFest family because it enhances the viewing pleasure. I took that as the best compliment ever.”