09:00  Start your journey early at the Pile Gate (The Placa Thoroughfare, Stradun), built in 1537, which takes you into Dubrovnik’s enchanting Old Town.

09:15  Just beyond the gate are the steps that lead up to the ancient City Walls (inside the Pile Gate and to the left, admission £7), where you can soak up some unforgettable views of the Old Town and surrounding Adriatic coastline. At the coastal end of the wall, you’ll find the Fort Lovrijenac, or ‘Dubrovnik’s Gibraltar’, built in the 11th century. Once you’ve taken in the incredible views, make your way back
to the gate where you started.

10:45  You’ll feel like you’ve stepped back in time as you pass through the Pile Gate into the Placa Thoroughfare, with its limestone-paved narrow streets, each steeped in centuries-old European architecture. Keep an eye out for the stunning Italian-built 15th-century Onofrio fountains – the bigger of the two is one of Dubrovnik’s most famous landmarks, built in 1438. Spot it right next to the Pile Gate.

11:15  Stroll through the spotless streets to the Franciscan Monastery (Placa 2, Stradun). Building work began in 1317. It contains world-renowned ancient manuscripts and is home to the oldest pharmacy in Europe.

12:00  Hungry? Head down to the tiny Sugar and Spice Cafe (Sv. Josipa 5, dishes from £1.50). As with everything else purchased in Dubrovnik, pay in kunas to avoid being overcharged. Grab a meat pasty and one of the cafe’s famed carrot cake muffins. Wash it down with a cup of local coffee, whilst sitting in the historic alleyway beside the building.

13:00  Burn off those calories by visiting the 15th-century Rector’s Palace (Pred Dvorom 1, admission £4), the central government building of the old Republic of Dubrovnik. It looks pretty now, but has suffered damage from fires, gunpowder explosions and earthquakes over the years.

15:00  That’s enough pounding the pavements. Head back to the Pile Gate and make your way towards the Dubrovnik Cable Car (dubrovnikcablecar.com, admission £8 return). The car takes you up Mount Srd, home to the famous Napoleon-built Fort Imperial, a national treasure used by Croats to defend the city during the Balkans War. Get a harrowing insight into the horror of the 1991-1995 conflict by visiting the Museum of the Croatian War of Independence inside the fort (admission £2).

18:00  Watch the sun set from the top of the hill, where you’ll get great views over Dubrovnik and its surrounding islands – on a clear day, you can see up to 37 miles. Then head through the Old Town to Dalmatino Konoba Restaurant (Miha Pracata 6). Try the delicious cuttlefish black risotto, mussels and fried calamari for about £14.

21:30  Move on to Café Bar Buza (cafebuza.com), found through a hole in the southern city walls. Toast the sea view from this cliff-side bar with a £2.50 shot of fig rakia,
a traditional Croatian spirit.

23:00  The night is yet young, so put on your dancing shoes and pay a visit to the beachfront  EastWest Club (ew-dubrovnik.com), where the beautiful people party.

02:00  Wobble your way to the Old Town Hostel (dubrovnikoldtownhostel.com, from £20pn) for some well-earned kip after an eventful day. 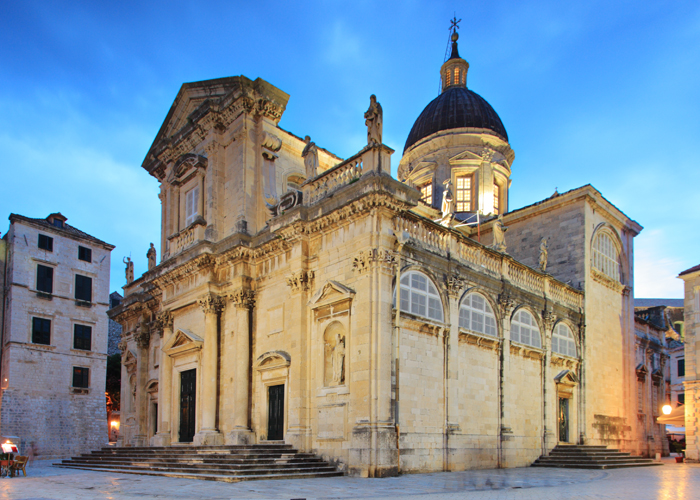 10:00  Scoff your free breakfast and then buy a bus ticket for 80p at the Pile Gate to Gruz Harbour, north-west of the Old Town, and jump on to a ferry heading to Lopud Island for only £5 return. Pick up a timetable, too, to avoid missing one of the three boats that returns to the city.

12:00  Stroll from Lopud’s port into town, and pass by one of the 30 ancient churches dotted around this small island. Enjoy the zero car traffic and wander down to the pristine sands of Sunj Beach. Sample some local beers for £2, soak up some afternoon sun, and swim in the lagoon-like crystal-clear waters.

15:00  Saunter back into town, clamber up a hill and find Peggy’s Restaurant (Od Sigurate 7). Grab a table overlooking the sea and enjoy a two-course meal of grilled fish and garlic mussels with house wine for £15.

17:00  Head back to the boat and enjoy the sunset on your return to Dubrovnik.

19:00  Check out the atmospheric Restaurant Poklisar (Ribarnica 1), accompanied by music courtesy of a friendly Croatian pianist and a £7 bottle of house wine.

21:00  Seek out more live music at Trubadur Hard Jazz Café (2 Bunieva Poljana). Grab a beer for £2.50, chat with the sociable locals and remember Irish playwright George Bernard Shaw’s famous words: “Those who seek paradise on Earth should come to Dubrovnik.” We find it hard to disagree.

Return flights from London Stansted to Dubrovnik from £81 with easyJet  easyjet.com