09:00  Steeped in more than 2000 years of history, Nepal’s capital is a colourful melting pot of age-old Asian cultures and traditions. Start off your day with a trip to the dazzling and iconic Durbar Square (Ganga Path, admission £6), a series of courtyards housing unique centuries-old palaces and temples. The location for the crowning of kings, Durbar Square is one of the most religiously important and remarkable areas in all of Nepal. Check out the Kasthamandap wooden temple, which legend says was built from a single tree. This renowned pagoda is also said to have no nails or rivets holding
it together.

13:00  From Durbar Square, find some relative quiet in nearby Snowman Cafe (Freak Street) for a coffee and chocolate cake (roughly £3). Freak Street itself is a must-see: it was Kathmandu’s most famous thoroughfare in the Sixties and Seventies, when the city was filled to the gills with hippy overlanders in search of enlightenment. It remains popular with the backpacking crowd, though you are as likely to find a flat white as a banana pancake nowadays.

14:30  Prepare to be dazzled by the traditional rituals and customs at the Hindu Pashupatinath temple (on the banks of the Bagmati River). One of the most sacred Hindu temples of Lord Shiva in the world, you can also see pilgrims bathing at the adjacent ghats. There are many open-air Hindu cremation ceremonies along the riverbank, especially at Bhasmeshvar Ghat.

16:00  Head to tourist-friendly Thamel, with its chilled-out hippy vibe, and check out The Roadhouse Cafe (Chaksibari Marg, Kathmandu 44600) for a much-needed late lunch. It’s heralded by many as serving the best pizzas in Nepal, so be sure to try a wood-oven-baked dish with hot chillis on the side (£7). Thamel is the budget traveller’s hood of choice, with its warren of winding lanes offering up cheap accommodation, great restaurants and tours.

18:00  Being 4600ft above sea level, the temperature may fall a little, so wrap up and walk out of Thamel to the Sunset Bar (Hotel Vajra, Bijeswari, Swayambhu). Grab a relaxing beer for about £1.50 while watching the sun set, and take in the panoramic views of this beautiful city.

19:30  Flag down a tuk tuk and whizz over to Bhojan Griha Restaurant (536 Dillibazar). Sample the traditional dishes (roughly £5) and enjoy the Nepalese folk music and dancing, provided by any one of the dozens of ethnic groups that travel from the nearby mountains to perform.

21:00  Step into the 21st century and have a gander at the growing Nepalese punk metal scene. Check out The House of Music (Thamel Road) for upcoming local talent and general debauchery, courtesy of Kathmandu’s up-for-it traveller population.

02:00  A stone’s throw from the House of Music is  your bed for the night, at Hotel Encounter (encounternepal.com, about £21 per night). Get yourself a room with a balcony, soak up the sights of the city and then hit the hay. 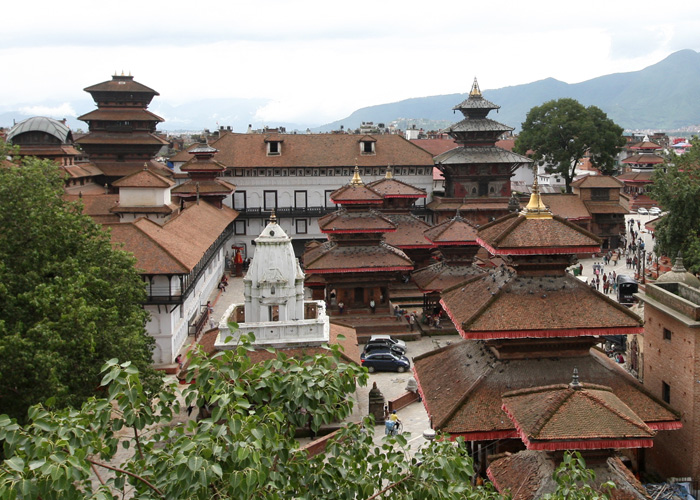 11:00  After a lie in, enjoy some breakfast. Body aching from all that dancing last night? Wander down the road for a rejuvenating massage at the NGO-run Seeing Hands Clinic (Kumari Marg, Jyatha, Thamel, about £10). After an unforgettable rub-down performed by the blind masseuers, your hangover should be a thing of the past.

13:00  Grab some lunch at Gaia Restaurant (Jyatha, Thamel). Tuck into one of Kathmandu’s best-loved dishes – vegetable momos (dumplings) – and a juicy chicken kebab, washed down with a lemon, ginger and honey drink for about £9.

15:00  Avoid the tourist hordes and join Tibetan Buddhist monks at the mesmerising Bouddhanath stupa (Bouddhanath, admission £1.50). The Unesco site was built in the 12th century and is one of the holiest Buddhist sites in Kathmandu. It’s also said to house the remains of Kassapa Buddha, a buddha born in Nepal. Make time to wander Kathmandu’s less touristy old town, too, to give
a more accurate picture of the city.

19:00  Enjoy dinner at one of Kathmandu’s musical and culinary institutions, The Funky Buddha (Bhagawot Sthan, Thamel). Start off with a thukpa noodle soup, and end on a dhal and a curry, for about £6. Round it off by trying one of the many flavours of shisha pipes on offer.

22:00  Fancy a dance and a few beers? Stay where you are! The Funky Buddha evolves into a club at night, playing some of the freshest electronic music around. Stomp to some dirty psy-trance and finish your magical weekend
with a bang.