09:00  It’s said to be Europe’s cheapest and sunniest capital. Plus, Lisbon is friendly, relaxed and pretty compact – you’ll be able to cover plenty in just two days. First, get acquainted with the downtown area, Baixa, with its big squares and pedestrianised streets lined with very European cafes, street performers and street sellers. If you’ve only got time to take a walk down one, make sure it’s Rua Augusta to see its arch and the majestic Comercio Square.

11:00  London’s got Big Ben, France has the Eiffel Tower. Lisbon’s equivalent is the World Hertage-listed Belem Tower (whc.unesco.org). The 16th-century fortress used to guard the city’s harbour entrance and has some impressive stonework depicting saints and animals, including an exotic-looking rhinoceros.

13:00  You’ll be pretty hungry by now, so get stuck in to some authentic Portuguese food at the cosy 100 Manieras (restaurante100maneiras.com). There’s no list of dishes to choose from; you’ll get a set tasting menu of Portuguese culinary greats. And the chef is pretty creative – a cod dish arrives at the table hanging from clothes pegs.

14:30  As you’re not here for very long, get behind the wheel of a GoCar (gocartours.com) rather than trying to cover everything on foot. The three-wheel, toy-like cars may only reach a top speed of 30mph, but they’re all kitted out with GPS to guide you around the city. Drop by Lisbon Castle or ride up one of Lisbon’s seven hills towards the Graca area (this is best to save until a little later in the day, as it’s a top sunset-watching spot). As you drive, a recorded voice will tell you all about each place, dropping in jokes and anecdotes about the city. Routes aren’t set, so you can go at your own pace, and the two-person cars cost from £20.

18:30  Have a few cheeky drinks before dinner. Barrio Alto is a good spot to get to know if you’re looking for a night on the town. The easy-on-the-eye working class quarter dates back to the 16th century, and its cobbled lanes have traditionally attracted bohemian artists and writers. By the time evening comes, the graffiti-covered facades give way to bars and restaurants, plus shops that stay open until late. Have a long dinner at Rua Atalaia’s gallery-cum-restaurant Imperio dos Sentidos (imperiodossentidos.com.pt), which serves up international cuisine such as cod, prawn and spinach lasagne, £10.70, and tempura prawns with chilli sauce, £6.50. Go next door to Capela, a favourite for electropop clubbing until the small hours.

03:00  When you can’t take any more, retreat to the Lisbon Old Town Hostel (lisbonoldtownhostel.com). Rooms at the friendly party hostel start at £11pppn.

10:00  If you’re into surfing, Ribiera d’Ilhas, near the village of Ericeira, can be reached by bus in half an hour from Lisbon’s Campo Grande Terminal. It’s known for its unbeatable waves and has been dubbed one of Europe’s best surfing spots. Boards are £17 per day to rent, and lessons £25.50 (ribeirasurfcamp.com). If you’re not into braving the surf yourself, but are keen to watch, get to Ribiera des Ilhas during the World Surfing Championships, which have been hosted here since the 1980s. When the championships are on it’s worth staying a bit longer to check out the parties, bars and concerts.

14:00  When you get back to Lisbon, have a lunchtime break to sample some Portuguese cafe culture at Cafe no Chiado (cafenochiado.com). After a quiche or a hearty sarnie, don’t forget dessert – the ones here are renowned. 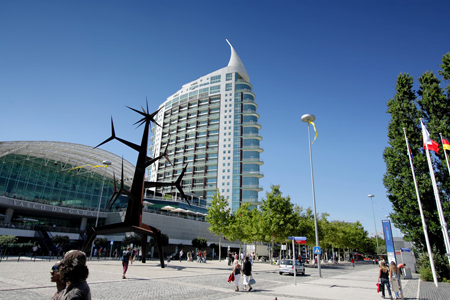 15:00  If you’re not all watered-out, hit the Oceanarium (oceanario.pt) to see penguins, otters, turtles, plus sharks, stingrays and barracudas. It’s Europe’s biggest aquarium with more than 450 different species.

16:30  Squeeze in one more dose of culture at the Lisbon Design and Fashion Museum (mude.pt). It’s got an Oscars gown worn by Renee Zellweger, plus fashion pieces by Jean Paul Gaultier, Vivienne Westwood and Yves Saint Laurent. There are also lots of design classics from 1937 until now, including furnishings, jewellery, and pieces demonstrating trends in design from around the world.

19:30  You can’t leave Portugal without having its trademark spicy chicken. Try Bonjardim, just off Praca dos Restauradores. Also known as Rei des Frangos (the King of Chickens) this rustic eaterie is famous for its spit-roasted chickens, and you can get a three-course meal for around £13. Be warned: you’ll probably never want to go to Nando’s again.

21:00  Catch some traditional Portuguese folk music at a one of Lisbon’s many Fado Houses. The most authentic is Senor Vinho (srvinho.com), which is owned by one of the country’s top Fado performers, Maria de Fe.

Flying from London to Lisbon: Return flights from London Gatwick to Lisbon cost around £127 with easyJet easyjet.com