The Western Australian man has been in action for several weeks but has so far avoided being caught on camera.

He told the Sunday Times in Perth “I’m helping people out. I don’t feel I’m damaging property. The amount of money these companies make off innocent people is insane. Where does that money go?”

“Not into car parks or safer streets. It goes into their pocket.” he complained.

In return for his services the mustachioed mystery man asks for a small donation which he donates to a local homeless charity.

The origins of Angle-grinder Man’s campaign against the authorities began when he was clamped himself. He told the paper “I went to a car park, pulled in, couldn’t see any signs, and I must have walked less than 100 yards and I was clamped. It was a con because they were watching.”

The Perth crusader says he was inspired by England’s Angle-grinder Man who hit the headlines back in 2007 with his antics in Kent and London. 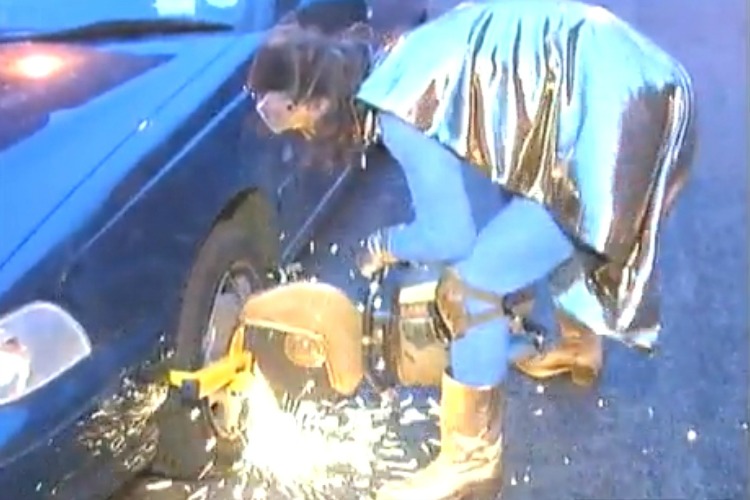 “My obsession with wheel-clamping is actually a rebellion against a much deeper malaise. Namely, the arrogant contempt that politicians hold for the people who put them into power, and whom they claim to represent.” said Angle-grinder man at the time on his website.

“He is committing the offence of criminal damage. We will deal with him.” said a determined spokesman for Western Australia police.

“He is committing the offence of criminal damage. We will deal with him.” said a determined spokesman for Western Australia police.

See a video of the original Angle-grinder Man in action below.