Wimbledon 2012: the top players and dark horses at this year’s championship

And, as much as Londoners will be anticipating a spell of sunshine, this year’s tournament looms as one of the most memorable in many years for reasons that have nothing to do with the unseasonal – yet oh-so-predictable – rainfall.
Right now, men’s tennis is in the middle of Golden Age, in thrall to the talents of a trio of players who, after sharing 28 of the past 29 majors, have now surely surpassed McEnroe, Connors and Borg as the game’s greatest triumvirate. Novak Djokovic and Rafael Nadal are the world’s top two players, and have wound up facing each other in an unprecedented four consecutive grand slam finals – after losing three times, Nadal got one back in Paris earlier this month.

Of course, Roger Federer is still knocking about – he’s pushing 31, but coming back to Wimbledon, where he has won the title six times, is likely to give him a spike in self-belief. And it would be rude to ignore the British contender, Andy Murray, who will surely break through one of these days. For now, though, he’s the best of the dark horses. However it pans out, Wimbledon 2012 promises to be another epic chapter in one of modern sport’s more engrossing dramas.

One more for Federer

There’s no doubt the wheel has turned in men’s tennis. Federer’s golden streak, between 2005-07, in which he won eight of 10 majors played, has been consigned to history and Federer, like many champions before him, is fighting a losing battle against younger opponents and against time itself. The question is whether the great man has one more surge left, one more shot in the locker that allows him to clinch a 17th major title – it’s been more than two years since he claimed No 16 in Melbourne at the start of 2010.

Federer (main image) is still playing high-quality tennis but he appears a step behind the top two. And unlikely to recover that lost ground. Still, if there is to be a last stand, Federer will fancy his chances on grass, where he remains the game’s most natural mover and most exquisite shot-maker.

He’s the reigning champion, having outlasted Nadal last year, and will begin the tournament as a warm favourite. Since the start of 2011, the Serb has dominated men’s tennis in a way that never seemed likely beforehand, but there were moments of strange listlessness in Paris. It may seem pedantic, given Djokovic still made it to the final of the French Open and had his chances against Nadal, the greatest claycourter in history, but, at times, he looked more vulnerable than at any time since the start of his purple patch. He was forced to fight back from two sets down in the fourth round and had to save match points against Jo-Wilfried Tsonga in the quarters. Of course, he clicked into gear spectacularly against Federer in the semis, but if there are cracks appearing in his impervious game, they may be prised open at Wimbledon. 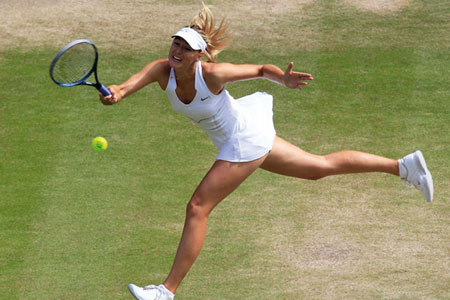 The French Open-Wimbledon double is considered the toughest combination of majors – not only do the surfaces reward different styles, but they are scheduled so close together that there is precious little time to adapt. Should Nadal clinch a third Wimbledon title this year, he would join Bjorn Borg as the only man to claim the Paris-London double on three separate occasions – the Swede, remarkably, did it three years running from 1978-80, all by the time he was 24.
In the way the tennis world once waited eagerly for a Nadal-Federer final, the rivalry between Nadal and Djokovic is now the promoter’s dream. A spanner could yet be thrown in the works, but it would be short odds on these two meeting in a fifth consecutive rand slam final, which, on relatively neutral territory, would provide a revealing glimpse of who truly holds sway in the game’s new definitive rivalry.

Another year of Murray madness

Poor old Andy Murray. By the standards of any normal era, he’s a complete enough player to have won at least one major, probably even two or three. But in the era where Federer’s dominance has been replaced with a titanic struggle between Djokovic and Nadal, Murray just doesn’t seem to have the afterburners to get him over the final obstacle.
For each of the past three years, Murray has made it to the semi-finals of Wimbledon, but no further – a record, dare we say it, that bears a deepening resemblance to that of Tim Henman, who, on four occasions made it to that stage, only to be bundled out in serialised parables of doomed hope.
It’s hard to see Murray knocking over any of the top three – let alone two of them in consecutive matches, but don’t expect the locals to temper their expectations.

Or maybe a dark horse?

At some point, another player will find a way to ambush the top four and join the list of recent grand slam champions.
The last man to do that was Juan Martin del Potro, the towering Argentine, who, at 20, rumbled Nadal and Federer in consecutive matches to win the 2009 US Open. Del Potro represents the biggest threat outside the top four. That said, he will need to improve dramatically on previous showings in London, where he is yet to make it past the fourth round.

The other perennial threat is Frenchman Jo-Wilfried Tsonga – he is, in patches, perfectly capable of outplaying and overpowering the world’s very best players – he had Djokovic on the ropes in Paris and beat Federer at Wimbledon last year – but frustrates with his tendency to burn brightly yet briefly.

Maria Sharapova turned 25 a few months ago, but it seems like she’s been around forever. Indeed, it’s eight years since she won her first major, at the tender age of 17, shocking top seed Serena Williams in the 2004 Wimbledon final.

Since then, success has been drip-fed; there has been a career-threatening run of injuries, but also a career Grand Slam. Sharapova completed the set in Paris to join some rarefied company – Chris Evert, Martina Navratilova, Steffi Graf and Serena Williams are the other women to have achieved the feat in the past 30 years and, if Sharapova has not matched their output, she remains a player of rare quality. Given the fickleness of women’s tennis, she could be set for a rewarding run, beginning with this tournament.

Through the looking glass

Nursing and childcare -well worth it