Wimbledon fortnight kicks off today and, undeterred by likely rain and tube strikes, fans camped out over the weekend to get tickets.

Today, London Underground said a good service is running on all Tube lines despite an earlier strike in protest over the sacking of a driver.

Members of the Rail, Maritime and Transport union walked out for six hours from 9pm yesterday, calling for the reinstatement of the driver Arwyn Thomas, who is waiting to hear whether he has won his claim of unfair dismissal.

Longer tube strikes that would affect those travelling to Wimbledon are planned for next week.

Wet weather has been forecast for the start of Wimbledon, meaning that the £100m, 3,000-ton retractable Centre Court roof will come into its own. 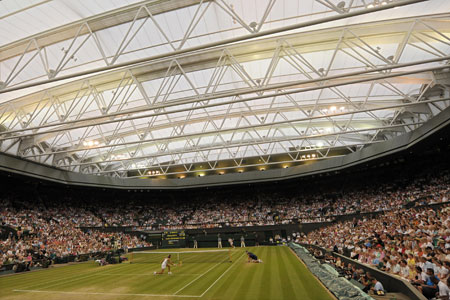 Although the weather is holding off at present, forecasts that say it will be wet for much of the first three days of the Wimbledon tournament and officials are ready to use their new roof.

If rain arrives on Monday, Wimbledon referee Andrew Jarrett, Seaward and chief executive Ian Ritchie will decide on the use of the roof.

Rafael Nadal’s opening encounter against American Michael Russell could be played under cover and Wimbledon’s Centre Court roof may also remain closed for Andy Murray, who is scheduled third on Monday.

“There’s definitely an advantage to get your match finished if the weather’s not good,” Murray said.

“If you can get on and get your match done, you don’t have to play back-to-back days. It’s tough over five sets.”

Nigerian villager had sex with a goat up to ten times, but it’s OK – he asked for permission first