I walk into a dingy stairwell where fight posters cover the walls. Many of fighters are women, and they look hard. Rock hard. I enter the gym.

About 20 bruisers are flipping heavy lorry tyres. To the right there are three boxing rings. One guy takes a clean punch to the face and hits the deck.

There’s the constant sound of pounding as men and women boxers smack bags. Sweat is flying; it’s like a scene from Rocky.

I’ve arranged to meet professional boxer Marianne Marston, who runs lessons for up to 50 women each week at TKO Gym.

Despite Marston being trained by champions Joe Frazier and Steve Cunningham, and winning a featherweight title at fight night Judgement Day, boxing hasn’t been an easy choice.

“There are many in the world of professional boxing who have tried to stop women from competing here in the UK,” she says. Many sports critics are also far from supportive; USA Today’s Robert Lipsyte refers to women’s boxing as a “freak show”. “One hundred years ago, they said women couldn’t be doctors, or lawyers, or vote,” Marston says.

“Thirty years ago, they said women weren’t capable of running a marathon. This year, we proved everyone that said we couldn’t box wrong.”

An estimated 19,000 women currently box in the UK every week, and that number’s growing. Marston’s class is an example of female boxing done right. “Real boxing training is anaerobic, unlike that comedy faux-boxing they call ‘boxercise’.”

I’m ready to give the sport a go, but I’ve accidently turned up to an advanced lesson, despite having never boxed before. “This class is strictly invite-only, and these girls are training to compete,” Marston says.

My face turns pale. I’m about to be pummelled. Luckily for me, Marston’s fierce in the ring, but has a gentle demeanor, similar to Olympian Nicola Adams, who’s shattered stereotypes of female boxers.

“I’ll give you a few pointers and you can work on a bag,” she says amiably. After 15 minutes, I’ve already worked up a sweat. Serious boxing raises fitness levels, speed and strength.

“It is the most effective form of conditioning you could possibly get,” reckons Marston, but there’s far more to boxing that just a workout.

“It massively builds confidence and the combat element makes it an exciting sport, whether you are participating or just watching.

More than ever there’s an appetite and audience for women’s boxing.” 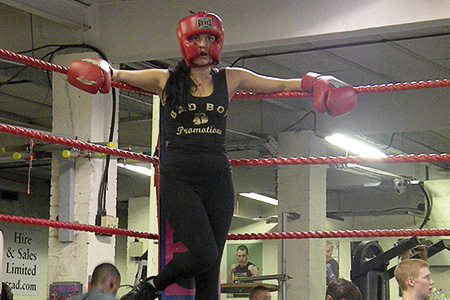 What: If you’d prefer not to train with beefy blokes, try this awesome boxing class in both South Bank and Shoreditch. They’re all about making women feel empowered and not intimidated.

The endorphins you get from a session will produce a natural high to keep you coming back for more.

What: For one-on-one boxing coaching, Mark Rahaman’s your man. He’ll have you training outdoors in London’s parks. Rahaman guarantees that by the end of your training course, you’ll be stronger, leaner and more toned.

He’ll also tailor the session to your individual goals. Whether you want to melt away body fat or improve your overall co-ordination, you’ll be fighting fit in no time.

Isn’t a wedding in Budapest wonderful

Clubbing in London – Bugged Out presents Jackmaster at XOYO