Working at the Olympics

If you’re looking for short-term work during the summer, forget signing up as an office temp. London 2012 is hiring 100,000 people to work in different roles to support the Games – and there are still jobs going. You could be a brand protection lawyer, part of the opening ceremony, or, if those don’t work out, get yourself employment as a cleaner.

Responsible for all things logistical is the London 2012 Organising Committee (LOCOG). It sells tickets and makes sure all the venues are up to scratch. It also provides all the sports equipment.

There are pages of job ads on LOCOG’s recruitment website (locogrecruitment.london2012.com) – with exciting titles such as VIP co-ordinator (looks after important guests), athlete services group leader for table tennis (takes care of the team) and road race manager for spectator experience (makes sure people without tickets get to see parts of the road races).

Adonis Pierre, 24, from Leytonstone, East London, who works in the security department, says: “My favourite experience at LOCOG so far is the opportunity I’ve been given to meet so many different individuals.

“Before I started working here, I asked myself if I would be capable of being a part of such a big event and undertaking such a huge task. I remember standing in the interview assessments room on the Olympic site and looking down from the window of the 22nd floor, thinking that I might have the opportunity to be part of the greatest show on earth.” 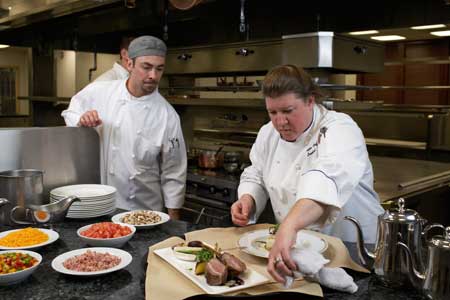 Like attention? You’ll probably want to be part of the biggest event – the opening ceremony. The initial welcome is a chance for Blighty, with the help of Danny Boyle and his artistic team, to show the world what it’s made of. The opening ceremony is the biggest, but there’ll also be a closing one and a total of 805 victory celebrations across the UK to celebrate medal events.

There are roles in the spectacles themselves, and support jobs in areas such as IT.

Dan Shipton, 29 from Bow, East London, is lucky enough to get backstage for the big moment, as props production manager for London 2012’s ceremonies. “It’s my job to manage how to achieve the prop ideas that Danny Boyle and the other creative directors have come up with for their ceremonies,” he says.

“The overwhelming thing that I have to remind myself about is scale. The four ceremonies [Olympics and Paralympics] are the biggest shows to have been attempted in the UK; they are some of the biggest in the world.”

If you don’t have skills relevant to the positions in the organising committee, and don’t fancy the opening ceremony, there are various service and hospitality jobs that’ll give you a glimpse of the big sporting events.

Fourteen million meals will have to be cooked for athletes, visitors and spectators. And even the cleaning jobs let you have a sneak peek into the Games – if you’re employed to keep the venues looking ship-shape you might get to watch some events too.

There are also more people-based roles, like in retail – for assistants, supervisers and managers selling merch in shops near the Olympic site. Or go for a steward role, welcoming visitors from around the world to the Games, and you’ll be spending your shifts at the Olympic venues.

If all else fails – or if you just want to get involved around your normal job – volunteer. There are roles in management, welcoming and providing information to visitors. London ambassadors are being recruited by BoJo to provide a visitor service around the city, and they’ll get free food, drink and travel within London for every shift they work.

The Pogues and ?the Buzzcocks, Old Royal Naval College