London Scene: Top comedy, film, theatre and exhibitions in the capital this week

Jason Segel stars and co-writes this comedy drama, or rom-com, about a relationship put through the wringer. It’s the honesty of two people in love struggling to make it work, though, that’s the film’s strongest asset. Segel, in similar territory to both his character and script for Forgetting Sarah Marshall, is Tom, a talented young chef who proposes to his loving, devoted girlfriend Violet. With their differing career ambitions – he to have his own restaurant, she to follow her academic path – the nuptials are put on hold, indefinitely, but as sacrifices are made, their relationship is put to the test.

The sincerity with which the situation is handled is heartfelt and recognisable: Tom’s good intentions quashed by career disappointment as he watches Violet blossom, the new circles she moves in leaving him, and their relationship, behind. In Tom, Segel has written a beta-male it’s impossible not to root for; stripped of the more silly, geekish quirks of his other on-screen alter-egos, he’s a more mature creation. There are plenty of eccentric supporting characters, too – Brian Posehn’s ‘recovering’ alcoholic steals scenes relentlessly, alongside a smattering of gross-out gags. As with many of the films born from Segel’s pen, it is overlong and loses its spark en route to its predictable conclusion, but the chemistry of the two central performances elevates it above standard rom-com fare. Funny and sincere.

Paranormal Activity creator Oren Peli masterminds this new horror with the former’s haunted house replaced here by Pripyat – the deserted town on the outskirts of the titular nuclear power station, which, as a group of thrill seeking holiday makers discover, is just not all that deserted afterall.

Bruce Willis stars as a career gambler who picks up Rebecca Hall’s stripper-turned-fortune-seeker in Vegas as his good luck charm. Throw in Joshua Jackson’s undercover journo, a host of eccentric hangers on, heightened stakes as the bets go south and displeased folk get stuck in, and a feisty, throwaway spirit, this could be a guilty treat. Or, it could just be throwaway.

In town for three unique shows only, Michael Winslow descends on London to show exactly how one man can make so many noises – 10,000 voices, too, and most likely plenty more – all by himself. It’s one-of-a kind comedy. If you love the Police Academy movies, or just enjoy laughing, you’d be a fool to miss out. 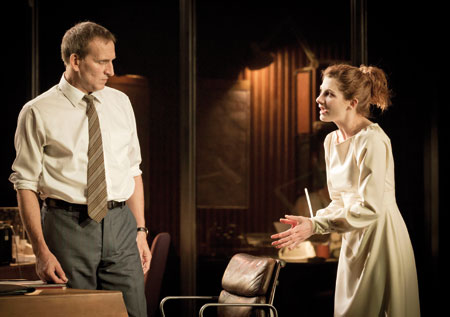 Greek tragedy can sometimes be a rather distant affair, but director Polly Findlay’s urgent interpretation of Sophocles’2500-year-old work (using a 1986 version by the late Don Taylor) takes place in a more or less modern hub of political activity and grips from start to finish.

A concept is all very well, as long as it serves the play, rather than vice versa. While 21st-century multicultural America is a contrasting backdrop to the early 20th-century aspirations of EL Doctorow’s 1975 novel’s characters, this revival – a tale of broken and fulfilled American dreams – of the ‘98 musical adap doesn’t always satisfy.

This exhib, featuring the likes of Yoko Ono, Chris Burden and Andy Warhol, looks at art which explores the unseen and the hidden. So if that sounds like odd plinths with nothing atop them, then you’re on the right track (one display is exactly that). There’s also a ‘haunted’ black tunnel and Jeppe Hein’s Invisible Labrinth.

Heathrow chaos will ‘concentrate the minds of management’