Film: A Fantastic Fear Of Everything

Simon Pegg scored big with Shaun Of The Dead, and graduated on to multi-million pound movie franchises, such as Star Trek and Mission Impossible. His latest sees him back on Brit-flick ground, and is a gloriously quirky, funny horror-comedy.
Based on a short story by Withnail And I scribe/director Bruce Robinson, Fear tells of Jack (Pegg), a children’s writer who dreams of becoming an adult author, only to find researching Victorian murders for his planned horror novel leaves him crippled by a fear of the outside world. When a big business proposition comes his way, though, he has to face these fears, including a laundrette tied to a childhood incident, even if his darkest demons are realised.

Pegg is front and centre for the most part as lead and solo star. He holds the film together well, nailing the comedy – you’d expect him to – and handles the drama with aplomb, neatly conveying Jack’s inner turmoil as the ‘little boy lost’ who’s trying to make a break for the adult world.

First time writer-director Crispian Mills (of Kula Shaker fame) layers it with a gloriously colourful palette, Jack’s decrepit flat a seething nightmarish pit, the world outside a rabbit warren of alleyways laced with shadows and dread. The pacing is off slightly, the third act lacking the punch of the opening, and a serial killer storyline never quite gels, but it’s a feverishly irrevernt yarn, nonetheless.

Good for: Seeing Pegg back to his indie-flick roots. Read interview P30

Good for: Seeing Pegg back to his indie-flick roots. Read interview P30

Rodrigo Cortes, the man behind the odd-sounding but surprisingly taught Buried, which put Ryan Reynolds in a box six feet under, returns with a beefed-up cast and supernatural amibitions as spook-hunters Sigourney Weaver and Cilian Murphy meet Robert De Niro’s psychic with devastating results. Going by what he achieved last time out, this should be a creepy treat.

Holly Walsh is the MC for this very special evening of comedy and funny business. Canadian Tony Law and Simon Munnery (right) are the confirmed acts so far. There’s also a special guest of the so-special-we-can’t-possiby-say-who-but-you-won’t-be-disappointed variety. So get prepared for some serious laughing.

The Madchester gods are back together and have a slew of headline festival shows this summer, so get down to this exhibition and reacquaint yourselves with their heyday. Never before seen pics and backstage snaps of the band from their early days through to their iconic moments let you see behind the legend.

Robert Pattinson stars in David Cronenberg’s adaptation of Don DeLillo’s novel, about a billionare asset manager who traverses Manhattan in one fate-filled day in which he loses all of his wealth. Cronenberg’s a top fit for DeLillo’s subversive material, with Pattinson set to shake free from those Twilight shackles in a tough, uncompromising role.

On general release from June 15

Britain meets Bollywood in Tanika Gupta’s lively if unsatisfactory contribution to the World Stages season. Bollywood glamour and East End reality collide in this story of love against the odds, and while the production can’t be faulted for its energy, combining the old with the new, a little more sophistication wouldn’t have hurt. 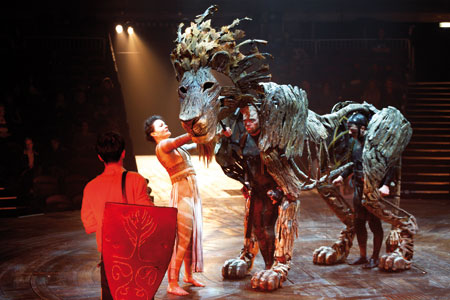 Theatre: The Lion, The Witch, and the Wardrobe

Rupert Goold’s adaptation of C.S. Lewis’s classic 1949 children’s story – about wartime evacuee Lucy and her three siblings who discover an enchanted kingdom – boasts some impressive effects to create Aslan, and really comes to life in the second half as the battle between good and evil (the White Witch) is fought to the death.