(Well, unless you believe that Simon Cowell discovered them, but we wouldn’t give him that much credit.)

The Aussie trio have continued writing and playing musical comedy for eight years now, and have done pretty well by it. (Admittedly not as well as Flight of the Conchords, or Tim Minchin, but they’re still doing alright.) We could go so far as calling them YouTube sensations, because, well, they are. Their ‘Four Chords’ video, in which they play a medley of successful songs that all have the same four chords, is one of the highest-rated YouTube comedy videos of all time.

Game of Thrones fans may recognise them from their ‘Rage of Thrones’ music video (they read the fucking books! Twice!), and teamed with the likes of ‘Do They Know it’s Pizza?’, where the three lament pizza parlours who insist on cutting their pies into eight (‘cut your pizzas into 12, it’s divisible by four and three’, they point out), their videos have amassed more than 90 million hits.

Next month they are returning to the Edinburgh Festival Fringe and in September they’re embarking on their biggest UK tour to date, with a night at Leicester Square Theatre on September 13. We had ourselves a sit-down with band members Jordan, Lee and Benny to talk about stuff and things, and we enjoyed ourselves immensely. Read on to do the same for yourself…

For anyone who hasn’t heard of you – curses to them – how would you describe yourselves?

B: We are three human beings who sing the funniest songs in the world at audiences, who enjoy them.

Naturally – and how about as individuals?

J: I’m the lead singer of the band, and I’m pretty much the best at all things in the world, including Tetris, but also at being in a band.

L: Some people say that I am the dumb one of the band. It’s not true, because I make sure I get my recommended daily intake of methylated spirits – I once drank a glow stick. Take that medical science.

B: I guess people would say that I’m the downtrodden one of the band.

J: The short one.

B: Sure, that’s another way to put it. I’m the one who writes all the music for the band so I’m kind of the star behind the scenes, but on the stage I am the butt of all the jokes.

J: He also spends time in mines, mining gold and keeping it away from dragons.

Benny, you’re classically trained – what made you go down this route?

B: It kind of happened organically. I’d always been interested in musical comedy – I grew up listening to people like Tom Lehrer. I played music for improvised comedy at uni, then everything kind of snowballed and here we are now…

So how did you guys meet?

L: We actually auditioned separately for the X-Factor but Simon Cowell said we weren’t any good on our own but he suggested we should form a band together.

J: That was a master stroke.

L: Yeah, he actually owns all of us individually.

Lee, could you already play guitar?

L: Well… to say that would imply that I can currently play guitar. Err, I’m the guitar owner. Benny will tell me the chords and notes to play and I will say “I can’t play that”, and then I pretend to play, and that’s the compromise we agreed on.

Would you say the comedy comes before the music then?

L: Not necessarily. Jordan and I have a comedy background but Benny has a musical background, so we complement each other really well in that sense. We try really hard to make songs that the people will enjoy the music of, as well as the comedy. 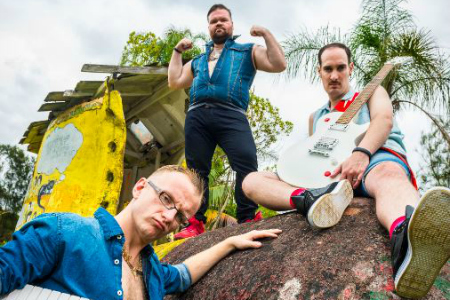 So what are you up to at the minute?

J: We’re filming a new web series called ‘Axis all Areas’. It’s a series of music videos, but we’re also shooting scripted behind-the-scenes content to go along with it, so there’s a bit of a Spinal Tap element to it.

And then you’ll be flying to the UK for your tour – are you just in and out of London or will you have time to explore?

L: We have a day off either before or after our gig and we’re hoping to do some filming in the YouTube studios there. We filmed the first part of our web series in the YouTube space in LA, which is the former Howard Hughes helicopter factory. It’s been made into a bunch of awesome studios that YouTube creators can use for a certain amount of days per month – depending on your subscriber level – and we’re a little bit addicted to it. We want to use the other ones all over the world for our YouTube channel. We’re also playing in a place called Ormskirk – it’s really exciting to visit places that you’ve never heard of before.

B: Yeah, it’s much more of a thrill to play somewhere that has a funny name, because if you say you’re playing in New York people are like, “Yeah whatever, everyone goes there”. No one goes to Ormskirk, so that’s the achievement.

L: The inhabitants of Ormskirk probably don’t have as much entertainment as New Yorkers so they’ll get very excited.

B: Yeah they won’t have any judge of quality, so we should really thrill them.

You travel the world a lot together – do you ever get on each other’s nerves?

L: We do spend an unnatural amount of time together, so yes, sometimes things get a little tense. We find travelling in different parts of the plane tends to relieve that tension, so Jordan will take the business class, I sit in economy, and we put Benny in an overhead locker.

Do you write your songs together? For example, for the lyrics to ‘Do They Know it’s Pizza?’ – was that inspired while fighting over the last two slices?

B: Yeah, as a group of three we are eternally frustrated by pizzas cut into eight because it just makes meetings and having dinner together very difficult, and we felt like that was an issue that needed to be addressed as it keeps getting overlooked in the world.

L: Some fans will often send us pictures of themselves with pizzas cut into 12.

J: Another thing the fans do is, in ‘Rage of Thrones’ we sing about having a signed copy of ‘A Feast for Crows’, so fans bring copies of the book for us to sign them – so take that George RR Martin, we’re signing your books man.

Do you know if any of the Game of Thrones cast saw the ‘Rage of Thrones’ video?

J: Not sure about the cast but a comedian friend interviewed George RR Martin and showed him the clip. I believe his response was “Cool”.

You’re best known for your song ‘Four Chords’. Would you ever release a serious ‘four chord’ song to try to make some genuine hardcore cash?

J: Yes. We did ‘Wrecking Ball’ and got Miley Cyrus to sing it. That went well.

Did you direct the video too?

J: Yeah we just snuck her onto a construction site and let her go crazy. That’s been very successful for us and we’ve funded many a drug addiction through that.

B: I’ve got a gambling hobby, too.

L: Don’t worry Benny. Keep working on it and soon it will be a crippling addiction.

B: Very excited, and a little jet lagged is how we’ll feel. We usually premiere a show in Edinburgh, but this year Melbourne and Sydney were the first to see this show, so we’ve tested it on them and now we bring only the cream to Edinburgh. It’s a great show with a bunch of swell new songs in heaps of different styles, everything from Johnny Cash to Macklemore, as well as a handful of your favourite Axis hits from the internet.

And what can London expect?

L: There’ll be some of that and some older material. We haven’t been to London for a couple of years now.

J: Yeah we’ve got two or three years of comedy backed up, so we’re ready to explode all over London.

See Axis of Awesome at Leicester Square Theatre on September 13  and at this year’s Edinburgh Festival Fringe, August 1 – 25.

Interview with Tonite Only