How did album Can’t Take A Hint start?

I’d done three albums before, all Grammy nominated of course, hence the name of the record.

But for the last couple of years I had been doing a very serious project, a documentary, The Big Uneasy, about why New Orleans flooded in 2005.

After going round the country with the film for half of last year, I wanted to get back to doing something fun and funny.

There are a lot of guests on the album, how did that come about?

It was people I knew in various ways: (Glee’s) Jane Lynch, who I’d worked with on A Mighty Wind and For Your Consideration; Dr John I had known through my residence in New Orleans; and I’ve been a Fountains Of Wayne fan for a long time.

Why not have the same single topic approach as before?

I didn’t feel there was one particular topic that deserved writing a bunch of songs for. And I liked these ones and thought I am entitled to do this kind of record too.

Most of these songs can be understood as character sketches – the record’s alternate name was Landscape Mode And Portrait Mode.

How do you avoid celebrity culture pitfalls, as on Celebrity Booze Endorser?

You should be with me when I am on a red carpet because you’d see what a non-celebrity I am.

I have been in these situations since I was a kid so I have figured it out: fame’s only use is if you have just enough to do the projects that you want to do – everything else is bullshit.

I was at a Superbowl game a couple of years ago and Brad Pitt was there.

He’s a lovely guy but to get out at the end of the game we had to be surrounded by a four-layered security bubble.

But we got trapped at the bottom of the lift when we got entangled with another movie star’s multi-layered bubble.

Do you prefer music projects?

There is no better hang than musicians, it is an indisputable fact.

A few years ago, we did Glastonbury as Spinal Tap and a tour as ourselves, we had made another record and Tap had, too, and I looked back at the end of the year and thought I had done nothing but music and had never been happier. 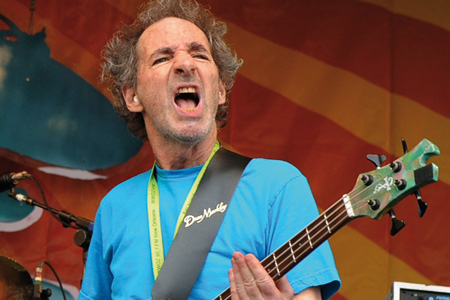 There are some more serious songs, though …

There’s a strong piece (Deaf Boys) about a subset of paedophile priests. There was one in Milwaukee, who died a few years back, who’d molested more than 200 deaf boys.

The same week he died there was a story about an Italian priest, too. It would be very easy to write a song from outside denunciating that guy but I was intrigued about writing from that character’s point of view.

And Like A Charity is about someone very famous that we know who’s gone down to Africa and made huge promises to people of a certain country and then got away with a number of their children.


Were you glad to have the elections over and done with?

Have you ever had to take a really huge dump?

It was that kind of relief. It was like wrestling, there are two guys in the ring berating each other about how horrible the other guy is but they both get the pay cheque from the same person at the end of the day.

Like when you buy a car, people aren’t concerned about how they are going to get somewhere, it is a statement about who they are and that is voting in the States.

It is a lifestyle choice.

Do you feel optimistic about the future?

There were so many areas where the two guys agreed – they both agreed on cutting social security, but not until after the election! – and they both said nothing about climate change.

Does that mean you’re passionate about climate change?

It is kind of a big issue in New Orleans, and New York has experienced something different recently.

It’s about trying to get it in to the public’s consciousness despite the best efforts of the political system to ignore it.

Who’s your favourite character to play?

Did you find it funny Liam Gallagher supposedly thought the band were real?

It is the greatest compliment. We set out to make a movie that got it right.

But there were so many obstacles, if just one had proved more effective the film would never have seen a theatre.