Interview: Antipodean author Vanessa Walker on her mantras and misdemeanours in India

In 2004, aged 34, Vanessa Walker left her job as a journalist at The Australian newspaper in Sydney to live in McLeod Ganj – a small town of about 9000 people nestled in the mountains of northern India – home to the Tibetan government in exile and Tibet’s spiritual leader, the Dalai Lama.

Setting off with the idea of dedicating herself to the study of Buddhism, Walker also wanted to begin research for her own book. Finding the majority of westerners unclear about the Dalai Lama’s objective, she wanted to outline exactly what it is he is seeking to achieve for Tibet. She also wanted to write an account of Tibetan people in exile and an overview of how Tibet’s Buddhist culture has suffered as a result of Chinese oppression.

During her stay in McLeod Ganj, Walker interviewed social activists, monks and members of Tibet’s government-in-exile, including the Dalai Lama’s brother. Along the way she also fell in love with a former Tibetan monk to whom she fell pregnant.

Walker’s book, Mantras & Misdemeanours, is an up close study of the ongoing impact of exile on Tibetan people and culture, and a social and political account of the history surrounding the Chinese invasion of Tibet. It is also the story of Walker’s relationship and her pregnancy.

TNT spoke with Walker from her home in New Zealand, where she now lives with her Tibetan husband and their newborn son.

You grew up in New Zealand and later worked as a journalist in Australia. When did you first take an interest in Buddhism?
I did six months of travel through South-East Asia when I was 23. I came across Tibetans for the first time in Nepal. Nepal is the first place that Tibetans come into exile when they leave Tibet. Meeting them and knowing they’d lost their country but seeing them still so calm and happy, that got me interested, both in their circumstance and in Buddhism. I came back to Australia and started practising soon after.

Was it a difficult transition, leaving your professional life in Sydney for a city in northern India?
It happened after a convergence of circumstances. I’d been going to McLeod Ganj for a few years and I knew there was a story to be told, and then circumstances came together to point to the fact that it was a story I should tell. I wasn’t fed up in Sydney, I was very lucky with my career, but I never felt that newspaper journalism was the be all and end all. Writing a contemporary account of Tibetans in exile seemed like real journalism in a contemporary sense.

What was life like in McLeod Ganj?
It’s a mixture of Tibetan and Indian style and culture. The roads wash away every monsoon season and monkeys raid your house, there’s intermittent electricity and it’s freezing in winter. The population fluctuates with the seasons but it’s well set up. The Dalai Lama lives there and people line up to see him whenever he travels. You can meet hermits who live in the hills and lots of monks and nuns. There are so many Buddhist teachers and various meditation centres but it’s also very lively with lots of charismatic characters. It’s an extraordinary and intense place. I think it’s the best ever place to go.

How is globalisation and the influx of western travellers affecting the area and the Buddhist culture?
The western influx of tourists and money has created the usual characters you meet in any South-East Asian country: the street boys chasing easy money, street vendors, there’s even a nun who manages to get other people to pay for her restaurant meals. But in terms of the West and its affect – ultimately the danger of Western consumerism is that their culture starts to become diluted, and that’s sad for them and sad for us. 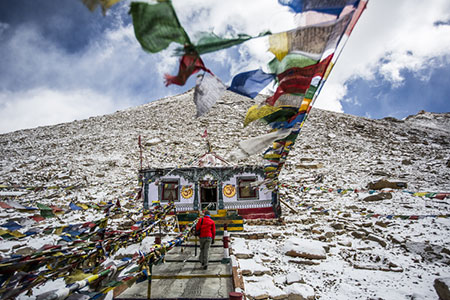 Why do Tibetans in exile choose to live in McLeod Ganj?
It is illegal for Tibetans to travel, they are not given passports. Those who do make it to Indiaare risking their lives and many people are killed trying. An escape must be attempted in winter and it takes between 20 and 40 days of walking the difficult slopes of the Himalayas. The Chinese border patrol shoot people on sight.

For those who do escape safely their first destination is Nepal, but the Nepalese always change their policy. Sometimes they give Tibetans back to Tibetan officials, sometimes they let them go and sometimes they incarcerate them inside Nepal. But with all that risk, itÕs a better option than staying for those who do attempt escape. Outside of Tibet, Tibetans can practise their beliefs and culture. Inside Tibet so much is illegal, just about every Tibetan I have met has been a political prisoner at some stage, for one reason or another.

Why did you want to write this book?
I found that western people don’t know a lot about the Dalai Lama and the Tibetan situation, and that’s because it’s hard to get information. The older Tibetan people are shy and the younger ones are not hugely informed, there’s a great info block because of China’s involvement in Tibet.

A significant part of the book is about your relationship with your Tibetan partner – a former monk…
Yes, he became a monk quite old for a Tibetan – in his teens. By the time he was in his twenties, he realised he was interested in the world and disrobed before I met him. We met soon after I arrived at McLeod Ganj and I think I just knew in my heart that he was the one. It was a matter of going through the motions because we felt that we were each other’s person. I fell pregnant after a very short time and we married in a Tibetan ceremony. We now live in New Zealand with our son.

In your book there are many mentions of Western woman with Tibetan men, but no mentions of Tibetan woman with western men. Why is that?
There is high unemployment in McLeod Ganj and it is hard for Tibetans to have any opportunity. Many marry foreigners and move to the West because it is their only chance to grow and have a life of opportunity. Tibetan woman are very shy though and I only know of one Tibetan woman who married a Western man. Also, the older Tibetans have a belief that the bones of a person are handed down through the father, and everything else by the mother. In essence, a child from a western woman and a Tibetan man will be Tibetan because of the bones. But the other way around, a Tibetan woman with a western man, then the child would be western. That might have something to do with it.

What kind of impact would you like your book to have?
I want people to be aware of where the Tibetan situation is now and to retain a little information about what the Dalai Lama is asking for. A lot of people presume he is asking for Tibet back – to go back and rule – but he is not. He’s conceded a lot to Chinese demands and he just wants Tibetans to have rights and to have a certain amount of control over their own affairs.

The Dalai Lama wrote the forward to your book?
I submitted the book and I’m not sure if he read it or if his people read it, but he did write the forward. I have met him before and I interviewed his brother. When I met him, he was really down to earth and just asked “what questions do you have?”.

For travellers wanting to visit McLeod Ganj, is it safe and affordable?
It’s like any developing place, in the sense that you have to be a bit careful. It’s about as cheap as Bali or Indonesia. If I was going for three weeks, I’d take about $500 for accommodation and food, but food is very cheap. In McLeod Ganj, you get involved with people and you tend to want to help them, and that can cost money. But I think it’s a great place to visit, it’s the best place in the world if you’re curious about Tibet and Tibetan people.

Mantras & Misdemeanours is published by Allen and Unwin, and retails for $24.95.