Cutting off your ears is a fast track to celebrity, fame and, inevitably, infamy.

It worked for Vincent Van Gogh, albeit it with a depressingly long lag factor for the troubled artist, and it worked for notorious Aussie criminal-turned-media celebrity Mark Brandon ‘Chopper’ Read, who cut off his ears in prison, or rather had them sliced off for him, and who’s the subject of comedian Heath Franklin’s new show, A Hard Bastard’s Guide To Life.

Rather than parodying the man himself – although, the extremes and contradictions of a guy who’s spent most of his life behind bars for violent offences including, according to legend, armed robbery, torturing drug dealers, and the odd spot of murder, too, provide no shortage of material – Franklin looks to Eric Bana’s portrayal of Read in Andrew Dominik’s 2000 movie Chopper for inspiration for his take on the Aussie hardman.

“I was fascinated by the film and just absorbed it. When everyone else was running around parties quoting Austin Powers, I was the creepy guy doing Chopper,” Franklin tells us, as he kicks off his Edinburgh run before heading to London. It was, though, as he has often noted, never his intention for the character to take off.

“I had watched Bana’s film far too many times and he got caught in my head so my girlfriend suggested I do a sketch with him in it,” he told New Zealand TV in 2010, just as the character’s popularity soared Down Under. “Several years later I found myself touring Edinburgh and New Zealand – it was never planned.”

The one-man performance show sees Franklin’s Chopper, a hyperbolic and absurd interpretation of the Read myth, offering his own inimitable take on the world – what’s wrong with it and the people in it, and, if he were given the reins, how he’d go about sorting it all out.

Or, in the words of Franklin’s on-stage alter-ego, it’s a step-by-step guide that teaches you how “to punch life in the guts, take compromising photos of its wife, and watch it cry as it hands over the keys to your future”. 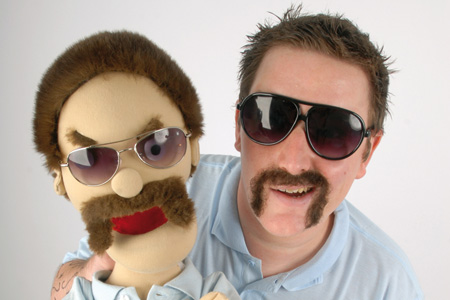 So what would Chopper do, were he to become omnipotent for a day?

The man who idolises Die Hard’s John McClane is displeased with the world in general, but there are specific folk that invoke his purest wrath.

Bankers, for one, “need to be kidnapped, robbed and pushed out of a moving van in a third-world country, although that would work for a lot of celebrities, too”.

His attitude to life, as you would expect from the man who told the whole Australian nation it needs to “harden the fuck up”, is simple: “Life is like a mallet – you can either be a mango or a diamond.”

Chopper, stage and real-life version, is the toughest diamond there is, and he doesn’t mind using his sharp edges to make his point.

Franklin, too, though in different ways, has his own points to make about the world in its current incarnation. “We are getting ahead of ourselves,” he says.

“Collectively we are pretty pleased with ourselves at the moment, which seems to come just before something bad happens. Right now, I think we feel exactly like the passengers on the Titanic did, or how bankers felt in August 2008!”

Playing Chopper has also surprised him. “It was the strange way he would lurch from being a violent unpredictable alpha male to seeming genuinely concerned and being quite charming.

When someone travels so quickly through their emotions, it opens opportunities in your performance. And there is an invincibility about looking like a hard bastard that flows over into the confidence of my performance as well.”

Franklin adds: “The more I find out about him, though, the more I realise I like Eric Bana’s version of Read better than the man himself.” A sentiment perhaps not surprising towards a guy who, as many have commented, despite being a regular bloke, likes a bit of torture, too. 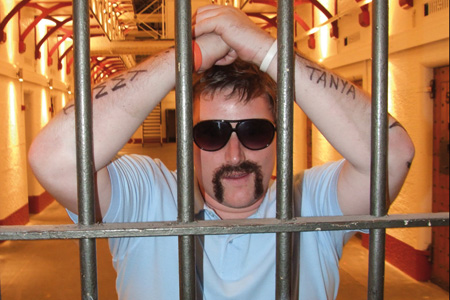 Real-life Read is ripe for mocking, his streetwise outlook meaning while he has been incarcerated for more of his life than he has spent on the outside, although he maintains he has never injured an innocent person.

Indeed, his skewed morals have seen him become a celebrity with a number of books – auto- and semi-autobiographical – to his name, and who has fronted a nationwide, if ultimately banned, TV advert about the indefensibility of assaulting women: “The lowest thing in jail is a woman-basher and a rapist,” Chopper threatened, brandishing his tatts.

“If you’ve bashed a woman, you’re a weak, gutless individual, and in prison you will get dealt with. Be afraid.”

So is Franklin at all worried Read might take offence, not get in on the joke, and choose to take some form of retaliation, as many who have crossed him have discovered?

“Yes. But I’m a long way away at the moment, so I’ll take a break from stressing,” he says when we quiz him on his thoughts about how his comedy might be received. He needn’t worry though, as Read, who’s seen the character many times since he was birthed in The Ronny Johns Half Hour, is a fan himself.

“He’s very funny, but he is only impersonating Eric Bana who is impersonating me,” Read told online Roo TV before adding: ”And he has clearly got ears in that sketch, too!”

Ears or not, Franklin’s Chopper is a hilarious take on one of Australian’s most notorious criminals, a show that will resonate with those familiar with his tales, and whose view of the world, and Antipodean traits in particular, will ensure it has a long life in the northern hemisphere, too.

So, it’s now time to find out – are you a mango or are you a diamond?

Interview with The Offspring