Interview – Rich Keam: Meet The British winner of the Best Job in the World competition

How does it feel to have won the best job in the world as Western Australia’s taste master for six months?

It feels great. I was on stage at the Sydney Art Gallery, where they had the presentation for the winners, underneath a load of yew trees and stuff. There were three finalists for each of the six categories [chief funster, lifestyle photographer, outback adventurer, park ranger, taste master, wildlife caretaker]. I was up there with everyone and I was a bit scared, nervous and anxious but excited, too. And then they read my name out!

My knees went a bit wobbly. Then they gave me a taste master apron and some giant salt and pepper grinders and I did a little speech. It has just been unbelievable.

How does it feel now?

It’s weird, it seems kind of normal now. The first application video was about five months ago and I got down from 300,000 to the final five and then the final three. I was out in Brighton [where he lives] the other day and I was talking to someone and they asked, ‘What do you do?’ So I said, ‘I’m a taste master for Western Australia,’ and they were like, ‘What!!?’ It seems normal for me and my family now. But to the outside world it seems pretty nuts.

How have your friends reacted? There must have been some envious eyes…

Haha, not envy. Loads of them said, ‘I knew you were going to win.’ But my grandparents and my girlfriend’s mum and dad are a little sad because we have a five-month-old boy, so they will be sad to see him go for a bit. But that’s why Skype is so good!

What were the adventure activities you had to participate in during the selection process?

We went snorkelling with whale sharks in Exmouth up the west coast. And we played Aussie Rules with the Sydney Swans.

How did you get on?

I loved it, you get to run around like a lunatic and throw balls around. It was excellent. What do you think was your strongest asset that helped you to win?When we got down to the final 25, we took part in a two-week promo tour which was to create some interest for the campaign. I wrote a few funny blogs about it as well as a song about Western Australia. 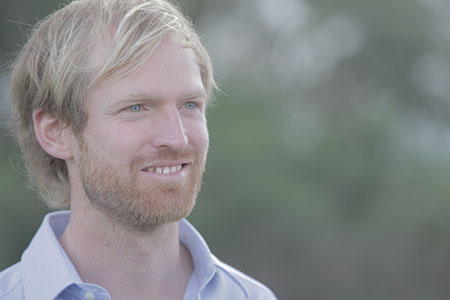 What else made you stand out from the other candidates?

I think one of the things was my not trying to give it the hard sell all the time. Instead, I just told funny stories that people could relate to.

What was the hardest part of it?

Being the focus of attention all the time, probably. There’s a film crew going around and it was quite tiring, every day was filled with so much stuff. Fun stuff, but then you had to go and write a blog – time management could have been the hardest thing! But we were so lucky, we stayed in five-star hotels, swam with sharks and looked at all the great restaurants in Perth. It was a brilliant eye opener.

What was the first thing you thought when you saw the job ad?

When I saw it I thought, ‘I want to go on an adventure with the family.’ I love food and music, they are my two main things. I had been to Australia when I was about 20 for a year on a working holiday visa, and loved it and knew how amazing it is. And I wanted to try something, to enter and see if I could win. Why not? If you don’t enter it then you’re never going to know. What are you most looking forward to?I am looking forward to going to Margaret River for a bit, and relaxing with some wine and nice food. It has all been so hectic recently.

What are you going to be up to first?

I had a brief teaser for the first month. I will be up in Kimberley, in the Bungle Bungles in the northwest, for the first month, as it gets too hot there later in the year and floods. I’ll be going to Lake Argyle doing some barramundi fishing and mud crabbing at Cape Leveque. I’ll be going to a pearl farm. And I got an email through saying the federal tourism minister wants me to do a skydive – in the first week!

How did your current employers react when you told them?

It was easy as I work freelance as a costume designer on films. I said to the costume supervisor, ‘I can’t come in next week because I’m doing this,’ and he said, ‘Go for it!’

Another interview with Grinspoon

Interview with The Cat Empire