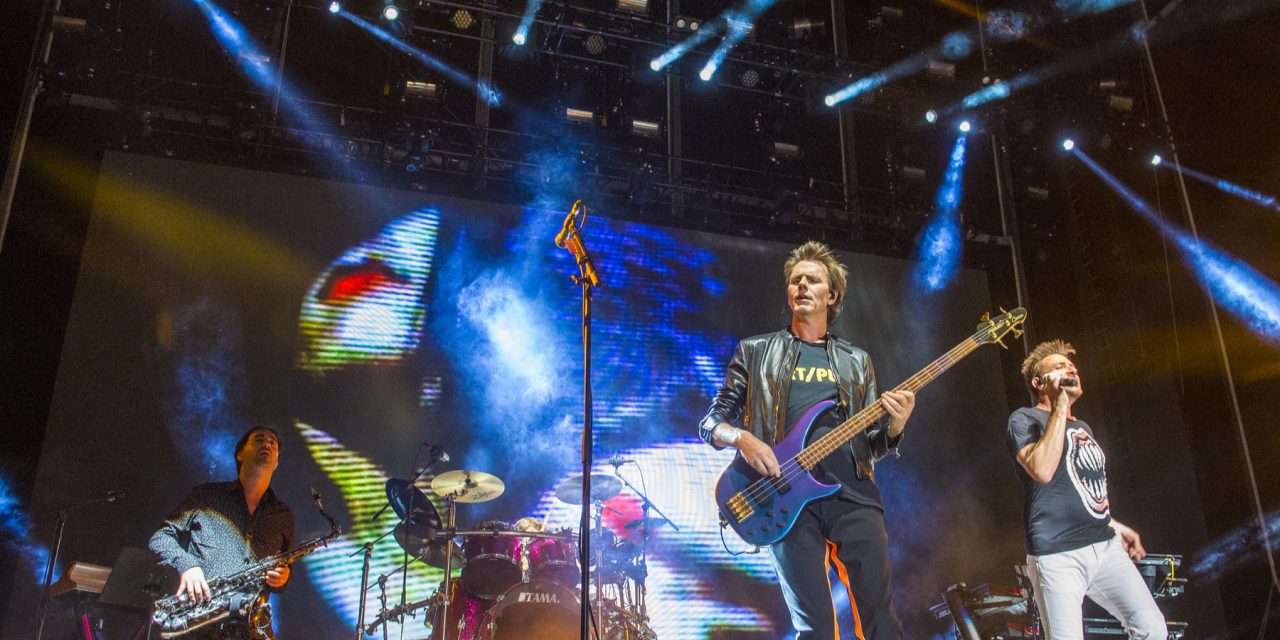 What made you team up with Timbaland and Danja for Red Carpet Massacre? Well, we’d finished a record (called Reportage). It was an indie record, much more rock and angrier than this one. We were looking at the war and you couldn’t avoid Iraq, America, Britain, Blair and Bush. We took it to the label and they were quite shocked that it wasn’t all dancing and uplifting, but more political. They said, ‘Well this is amazing but what are we going to do for singles?’ And we said, ‘Well we hadn’t really thought of that. We just made the record. We had spoken with Tim(baland) over the years and said we must do something together which is what you say but it never generally happens. But we did, we pulled it together in September 2006. We went to New York for five days and we came up with three songs to complete the record. But they sounded so different, and it was so inspiring that we felt like we were re-inventing our sound again which is very exciting when you’ve been around as long as Duran Duran have. It’s a bridge between the traditional Duran Duran sound and what people are dancing to right now.

I think I prefer Red Carpet Massacre to your previous album, Astronaut… I agree, I much prefer it to Astronaut. It’s more cohesive. I like the songs on Astronaut but it was written over a long time. This was written within a nine-month period in three batches. I feel we captured a time capsule in the energy of what’s going on around us.

Now to go back in the day, if we can. Do you look back at the ’80s and cringe, or do you embrace the ruffles? Not anymore than anyone else from when they were 20 years old. You look and think’ ‘oh, I wouldn’t wear that’. You look and you smile. The ’80s was the strangest time for fashion because anything would go. You wanted to stand out and be an individual. Usually fashion goes the other way, whereby everyone is wearing this or wearing that. Certainly in the ’90s it became the complete opposite, where the only thing that was important was what kind of jeans you were wearing, what kind of trainers you were wearing and was that a cool T-shirt. Everyone wanted the same things. But the ’80s was much more experimental and wacky. If you look at the designers that came out of that period, Armani, Versace, Jean Paul Gaultier, it was very diverse. But the ’90s, not so much so.

Who was the first to don the lipstick? Ah, I was waiting for this. I said to someone waiting for the interviews, who do you think will be the first in Australia to ask about make up? You’ve won the prize. I’m going to make a note of that… I would imagine it was either me or John. I’m going to say me because I’m always a bit more forward thinking with that sort of thing. Though John did have a nice line in purple at one stage.

Was the ’80s everything we imagine: the girls, the drugs, the mullet cuts? I think I can safely say that we had an interesting lifestyle through that period and indeed we continue to have an interesting and exciting lifestyle. I feel we have been very lucky to have been able to create every day and to play to audiences and generally have a career that we like. Were the ’80s wild, crazy and decadent? Yes, I think so.

This next question is from my editor. You come from Birmingham, so are you all Aston Villa fans? I loathe football – you can tell your dear editor. Simon is a Man U fan. An avid fan, to the point where wherever we are in the world we have to find something on the internet or some obscure Spanish channel that has a Man U game on it. And Roger, goodness I don’t know who he supports. He’ll be quite cross for me not remembering. I don’t support any football team. I’m not big on sport. I’ll sometimes watch an England game just to watch the pitiful losses that we make, but Simon is the mega-fan. He loves Manchester United.

Interview with a Big Things Fanatic

Interview with The Vaccines