What makes Melbourne’s laneways so special?
Melbourne’s laneways add another dimension to the city’s layout. While the majority of people travel in the main streets, there are hidden delights that can be discovered in the often by-passed lanes. History can be discovered while walking down a lane. Surprises can pop up at any time, from varied art work or a variety of stores. Some of the lanes are known for their street art, others for their history and others for their bars, restaurants and shops. Some have have bricked in windows and doorways and old signage, such as Albion Alley, once a terminus for Cobb & Co. Coaches. Bluestone pavement and the old and new paintwork have a story to tell.

Got a secret spot you can share with us?
The Urban Workshop Building near Madame Brussells Lane is a modern beautiful building, which has on display items from Melbourne’s early days. The lanes around the building are also quite interesting to explore.

Favourite bar in Melbourne?
I was blown away when walking down Russell Place and first saw the stunningly beautiful Bar Ampere. There are so many interesting and eclectic bars in unlikely laneways, including the Croft Institute in Croft Alley, built around a science laboratory; the glamorous Baroq House in Drewery Lane; Misty Place in the street art Hosier Lane; the chic Murmur Bar in Warburton Lane and so many more to discover.

Best place to shop?
While the large department stores in the city are fantastic, South Wharf and the Docklands have a surprising number of direct factory outlets. Well worth checking out.

Best street art you’ve seen in Melbourne?
The best street art I have seen is in a lane un-officially known as ‘Blender Lane’. It is situated next to Blender Studios and contains street art that could rival paintings in galleries. Donaldson Lane contains some interesting street art. Other lanes that are more popular and contain great street art are Hosier, Union and Rutledge Lanes and Duckboard Place.

What do you think of the laneway culture emerging in Sydney? A cheap imitation?
Sydney is following Melbourne’s example and is adding life to the city. It seems more difficult to make it work by adding on later, in comparison to Melbourne’s lanes which have been in operation since early days. Sydney seem to have a much smaller number of lanes, but what they are doing with them is great. Melbourne and Sydney can always learn from each other.

Anything you don’t like about Melbourne?
The city is developing fast and there are always improvements that can be made. I think it is a pity to see a few of the heritage buildings around the city are unused and in poor condition. It would also be excellent if there was a rail link to Tullamarine airport. 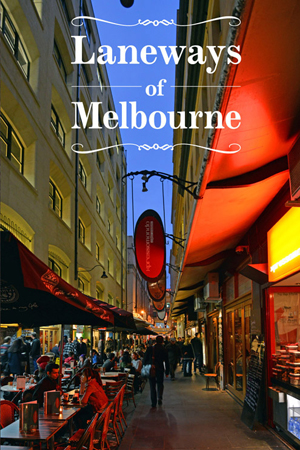 If I only had one day in Melbourne…
Put on your running shoes and make tracks from Flinders Street Station along the Campbell Arcade into Degraves Street, then north along Centre Place. Feel free to indulge in a coffee along the way.  Head west to admire the spectacular dome of the former Bank at 333 Collins Street, and continue to the Rialto Tower to admire the hotel. North through Bank Place and along Queen Street shows some fabulous old architectural buildings. From Lonsdale Street travel south through Niagara Lane to Elizabeth Street, to walk through the former GPO. Head south through Royal Arcade and explore Block Place and Block Arcade. Catch the City Circle tram to the docklands, along New Quay Promenade and see the statues in the piazza, north through Wharf Street to the Observation Wheel. Retake the tram to Flinders and King street corner. If time allows the Melbourne Aquarium is worth visiting, travel south to walk along the Yarra Promenade and continue to the top of Eureka Tower for a city view.

Most photographic place you’ve visited?
There is so much beauty around that makes this question difficult to answer. The Grand Canyon is my choice, Kornelia selects New Zealand and Tasmania. We have photographed around Australia and there are spectacular places of beauty all around. Victoria rates highly, there is so much beauty and you don’t need to travel far from Melbourne.

What were you working on before this book?
My background is in I.T and Kornelia [co-author] is a secondary school teacher. We are working on a series of books, called The Portraits of Victoria. The series shows the beauty that can be found in Victoria, historical places and points of interest for people to visit. The Dandenong Ranges and The Yarra Valley are the other books available. Laneways of Melbourne is the third book of the series. Currently we are working on a book covering Mornington Peninsula to Wilson’s Promontory.

The Laneways of Melbourne book can be purchased from most bookstores (including Dymocks, Readers Feast, Mary Martin, online stores), the website portraitsofvictoria.com.au/ or Melbourne Books melbournebooks.com.au

Interview with Papa vs Pretty