Now it’s back – filling the auditorium once again with the disciplined clatter of tapping feet as the 40-strong chorus of hoofers shows off a succession of tightly drilled routines in display after display of synchronised exuberance.

Set in the 1930’s during the Great Depression, this musical adaptation of the novel-based 1933 film features a talented small town wannabe from Pennsylvania, Peggy Sawyer (a vivacious Clare Halse) who, by a series of lucky accidents, not only scrapes into the chorus of Broadway-bound extravaganza “Pretty Lady” but then takes over the lead. 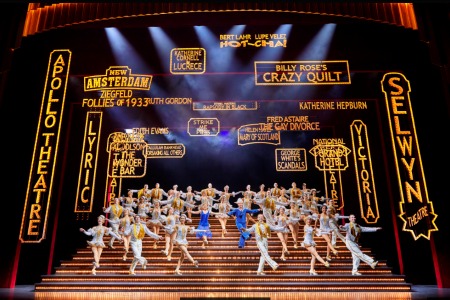 It’s a slight story, but the songs (including Lullaby of Broadway and Shuffle off to Buffalo) are tuneful, the sets are lavish (as are the glittering costumes, complete with feathers and lashings of sparkle) and energy just radiates off the stage. Sheena Easton brings a gorgeous voice to the role of the temperamental ageing diva who can sing, not dance – but comes with a much-needed wealthy backer in tow.  .

If you love tap, you’ll adore this. It’s a real feel-good night out – apart, perhaps from the slightly questionable methods of hot shot impresario Julian Marsh (Tom Lister) who really should learn to leave his chorus girl’s emotions alone.