So I’m afraid I can only report back on the first couple of hours of Timothy Sheader’s rather confusing three hour production which (either taking PC a step too far or making the point that we’re really all the same) adds to the lack of clarity by perversely casting two actors of different races as men who are supposed, for the purposes of the plot, to be almost impossible to tell apart.

Moving between Paris and London at the time of the French Revolution, both novel and play depict extreme poverty and excessive wealth. The set comprises three huge containers (flanked by video screens) which open up to reveal a viciously insensitive French aristocrat, murdered as he relieves himself seated on his golden toilet, or Dr Manette, imprisoned for 18 years in the Bastille, obsessively cobbling shoes to escape his psychological pain. Costumes vary from contemporary to period, and the current plight of refugees is made explicit. 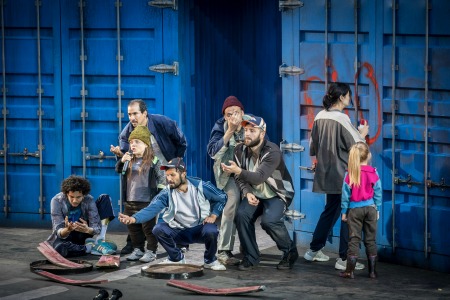 But the acting is variable and neither production nor dialogue encourage involvement with the characters – though Lucie’s stoicism as she waits, with her daughter, through the passing seasons for her husband Charles Darnay to be released is eloquently conveyed, and intermittent evocative music adds to the atmosphere.

There’s a lengthy (and rather necessary) synopsis in the programme if you want to ensure you know what’s going on, and, although I couldn’t persuade my companion to make a return visit, I’m intrigued enough to have arranged to go back to find out what happens in the second act.

Where in the world? Zac Dillun from Mauritus – Myrtos Beach, Kefalonia, Greece