Theatre Review: Anatomy of a Suicide

The dingy grey set is flanked by doors on either side, a further three face the audience. From these, one by one, emerge immaculate housewife Carol after a suicide attempt (in 1970), drug addict Anna (in 1998) and finally Bonnie, a gay doctor, (in a future 2033) whose stories unfold simultaneously, in parallel on stage, though separated in time by decades.

As the years go by, each new scene is heralded by changes of costume. The three protagonists – who, it becomes clear, are mother, daughter, granddaughter – stand in a row, virtually motionless like cut-out paper dolls, whilst the rest of the cast ritualistically undress and re-dress them, ready to play out the next episode of their lives.  The dialogue often overlaps, the similarities between these three very different women are impossible to ignore. 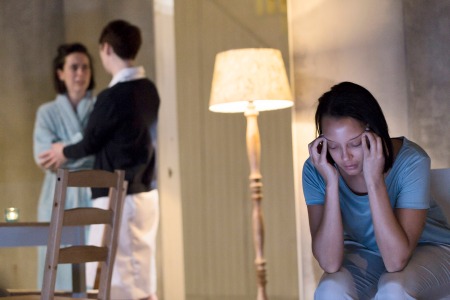 Hattie Morahan’s Carol is a detached, expressionless shell, her emotional fragility further rocked by childbirth, yet promising her baby daughter that she’ll stay as long as she possibly can to see her grow up. Kate O’Flynn’s vulnerable, high-as-a-kite Anna cleans up but can’t completely cover over the cracks in what Birch (screenwriter of the recent film Lady Macbeth) suggests is her genetic makeup. Adelle Leonce’s controlled Bonnie is prepared to take irrevocable measures to break what she sees as the inevitable cycle of inheritance. And around them friends, husbands, lovers try – against the odds – to provide support in this powerfully acted, experimental exploration of mental illness and depression.

Who let the hashtag out of the bag? Instagram responds to backlash