Charlie Sheen has posted an ‘unedited’ version of his ABC News interview with Andrea Canning on Youtube, revealing, perhaps, what he would really like to have said in answer to the 20/20 questions, which includes calling his interviewer a “fucking hairy chicken”.

ABC’s 20/20 interview – during which Sheen espoused on tiger blood and being “bi-winning” – is infamous. But newfound master of social media Sheen has turned the tables on his buttoned-up interviewer with a gloriously weird spoof version.

Sheen has added spoof footage in between the straight-laced questions fired at him by Canning. He makes good use of his own catchphrases and at one point “zaps” different slogan t-shirts onto himself. 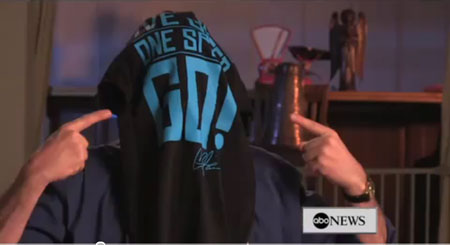 Charlie Sheen: The Unedited Version shows the former Two and a Half Men star having a choking fit ad shoving cigarettes into his nose and ears in response to the question, “Are you on anything right now?”

Canning’s “When was the last time you used?” question is replayed repeatedly as Sheen shoves a taco into his mouth, puts headphones on and talks about a hippopotamus and speaks gibberish.

When Canning asks, “Are you willing to take a drug test?” Sheen replies:

ABC are unlikely to be happy about the clip, which blatantly takes the piss out of prissy Andrea Canning. At one point, Sheen rounds on her, saying:

“What do you really know about anything? I mean look at you?”

And, more spectacularly: “You’re a fucking hairy chicken, with a corndog limp.”

The clip ends with Charlie, joined by his amigos, dancing around singing boyband style before being shot dead in a swimming pool by Al Pacino’s Scarface character, Tony Montana.

Sheen uploaded the seven-minute video on April 3 and has reportedly showed it during his Violent Torpedo of Truth shows. 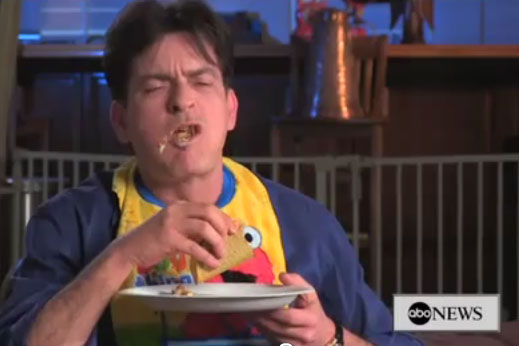 “Actually crying when he turned into a cigarette!” said bjparker191.

While, in response to Sheen disastrous first stand-up show, willboe33 said: “Well, that was a hell of a lot more entertaining than the Detroit show.”

However, others are less impressed.

“Jesus Christ Charlie you need some fuckin help cause I don’t want to see u as the next celebrity death tragedy,” wrote hunzi851.

While applepiewithtoast said: “So he understands that he made a complete ass out of him self during this interview and now he’s trying to make a fun thing about it so people will forgett about the d-baggery?”

What Options Do You Have for Bad Credit Loans?