Former Eastenders actress and Strictly Come Dancing 2010 winner Kara Tointon plays Bella Manningham, whose complex emotional bullying at the hands of her sadistic husband Jack, played by Rupert Young (Merlin, Hotel Babylon, Doctor Who) has left her doubting her own sanity. The reasons for Jack’s evil and manipulative behaviour are shockingly revealed during a late-night visit by a mysterious guest, played by seasoned all-rounder Keith Allen (Trainspotting, Shallow Grave, The Others). 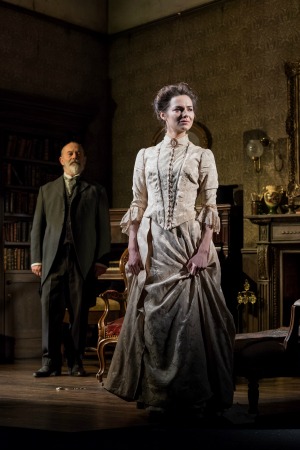 All the drama takes place in the couple’s Victorian drawing room, the claustrophobic setting reinforcing the tension which has been wound tight by Tointon’s solid playing of a needy, emotionally broken woman brought to the edge of despair by a cruel and dominating man. She is heartlessly ridiculed in front of her own servants and made to believe that she is slowly going mad by a callous husband whose affection she still desperately yearns for, even whilst suspecting that he is disloyal and that he has only his own avaricious interests at heart. The chauvinistic laws of the late 1800s that form a backdrop to this story – such as the one that rendered a woman’s money automatically the property of her husband once she married – may have now thankfully passed into history, but the crime of domestic abuse is still, unfortunately, a depressingly contemporary reality for some.

There are some ghostly stage effects to add to the unease, and great acting by even the minor characters (Charlotte Blackledge shines as a seductive and scheming housemaid) help stir up the underlying feeling of menace. Excellent direction by Anthony Banks and a top quality cast make this a production not be missed when it returns to London (Richmond Theatre) from 6th to 11th March.