Theatre Review: The Pirates of Penzance

Now back for a limited run, this predominantly recast production (under the care of revival director Sarah Tipple) proves surprisingly conventional – with the exception of Alison Chitty’s boldly colourful geometric designs which come from another era altogether.

The story is both silly and simple – though with an unexpected little twist which I won’t give away. Young Frederic (David Webb with a light but pleasing tenor voice) has been accidentally indentured to a band of soft-hearted pirates, but has now reached the age of 21 and so, he believes, is free to pursue a more law-abiding life and pledges to run them to ground.

Things don’t go quite to plan, though, and the arrival of Andrew Shore’s Major-General – with far more daughters in tow than any man should reasonably father – turns the pirates’ thoughts to grabbing a wife and settling down. 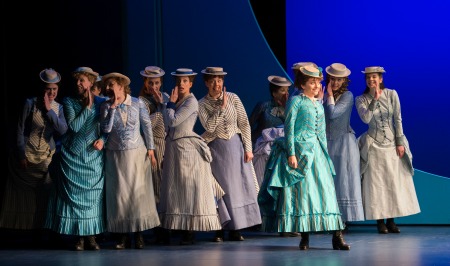 John Tomlinson’s Sergeant of Police with his chorus of truncheon-wielding policeman ups the comedy after the interval, Ashley Riches is a persuasive Pirate King with a rich baritone, and a perky Soraya Mafi brings cheeky charm, vitality and a lovely voice to the role of Mabel, the daughter who promises to remain true to Frederic no matter how long she has to wait for him.

The witty libretto doesn’t always fly, but with the aid of a strong chorus, this welcome revival makes for an entertaining (if hardly ground-breaking) evening with enough catchy tunes to send you home smiling.

Baby hare in the woods

Tube lines could be sponsored to freeze fares, say Tories