Based on Michael Powell and Emeric Pressburger’s award-winning 1948 film (itself inspired by the Hans Christian Andersen fairy tale), it’s an always watchable mix of the buoyantly bauble-bright (seaside frolics in Monte Carlo) and the desperately sad as talented young dancer Vicky Page sacrifices her career for love, only to decide that, ultimately, the lure of success – just like that of the red shoes – is too strong to resist after all.

Once again, Bourne proves himself an accomplished storyteller, charting the torment of obsession and of creativity (the pain, the pleasure, and the rewards it can bring) to a score which draws heavily on Bernard Herrmann’s music from the golden age of Hollywood. Regular collaborator Lez Brotherston provides a sweeping proscenium arch which effortlessly creates a stage within a stage viewed from all angles, his design smoothly transporting us from a lush mansion to a cheap bedsit, from the opera house to a drab East End musical hall. 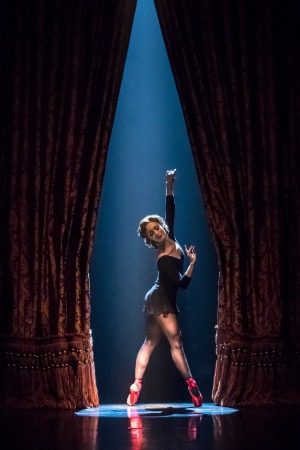 A physically pliant Ashley Shaw shines as the ambitious Vicky and is well matched by Dominic North’s expressive Julian, her composer lover who ignites the increasing jealousy of Sam Archer’s impresario Lermontov who launches – and destroys – both their careers. Liam Mower (an original Billy Elliot) adds intentionally lazy humour as he rehearses – in his dressing gown, fag dangling from his lips – with Michela Meazza’s Prima Ballerina (whose injury gives Vicky her break) and Bourne’s homage to the mock-Egyptian sand dance adds a touch of sauce to an interlude of sheer comic fun.

A trip on the world’s longest Alpine rollercoaster