Who will make the sports headlines in 2011? TNT’s sports editor Tom Sturrock predicts…

Surely it’s the All Blacks

Come September, the mighty All Blacks will have another opportunity to exorcise the demons of frustration and anti-climax that have shadowed the Kiwis since 1987. The World Cup will be held in New Zealand and they’ll go in, as ever, warm favourites.

The history of the All Blacks’ underachievement at rugby’s showpiece event is littered with near-misses and famous defeats. But surely, this is the year the All Blacks get the monkey off their backs; they are too good, too committed and too talented to keep coming home empty-handed.

Potential surprise: Maybe Australia will find some forwards and ruin the All Blacks’ party.

A new landscape in AFL

The Gold Coast Suns will this year become the league’s 17th team, ahead of the West Sydney Giants entering the fray in 2012.

Will the Suns win any games? Does anyone on the Gold Coast care? And can rugby league convert Karmichael Hunt actually play or is he just an overpaid marketing prop?

The Suns picked the eyes out of last season’s draft, so the performances will come, along with a decent following. But probably not this year.

Potential surprise: The Suns signed the league’s best player in Gary Ablett and the Giants will be trying to pull off a similarly impressive coup. The real surprise will be if they fail.

Four World Cups in a row

Australia are back in the pack when it comes to Test cricket and some major questions must be answered before they can even think about re-establishing themselves at the top of the tree. How much longer will Ricky Ponting, Mike Hussey and Simon Katich be around? Who are the replacements? Is Michael Clarke really the best, and only, option to succeed Ponting as captain?

Before then, though, Australia have the chance to win a fourth straight World Cup, the tournament starts next month on the subcontinent. Australian cricket isn’t what it used to be, but maybe, just maybe, they have one glorious shot left in the locker.

Potential surprise: Australia are battling, but the poor old Kiwis will start even further back at the World Cup.

Less than 12 months ago, the Melbourne Storm’s core of superstars were the envy of the league – no one could figure out how they managed to retain all those big names. As it turned out, the Storm hung on to them by keeping two sets of books and paying their players extra wages outside the salary cap.

But in 2011, there’s enough talent and will to succeed for the Storm to be dangerous again this year.

Potential surprise: In rugby league heartland, the Melbourne Storm were always disliked. So, in the wake of their cap rort, they can surely expect a warm welcome back to the league’s upper echelons. Or not. 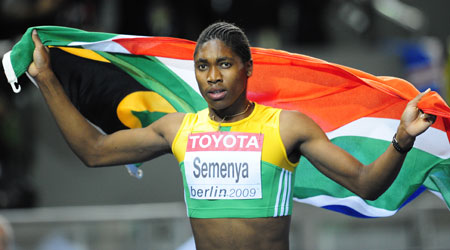 At the 2009 world championships in Berlin, South African 800m runner Caster Semenya streeted the field. In the aftermath, though, Semenya was found to be a hemaphrodite, with unusually high levels of testosterone and internal testes.

Semenya will attempt to defend her world title in South Korea in August. She’s been cleared to compete, so everyone should just sit back and admire her performances, right?

Potential surprise: The London Olympics are about 18 months away now, so it will be a major surprise if the British sporting press can avoid going totally over-the-top whenever one of theirs wins a medal.

Australian sport is at a bit of a low ebb at the moment, but in a rare bright spot, Samantha Stosur has a real chance to become the first Aussie woman to win a major since 1980.

The Williams sisters, essentially semi-pros these days, are the only ones who can match Stosur’s power and athleticism. She turns 27 in May so is in her prime and the women’s game lacks depth, so she’s got a two-year window to cash in.

Potential surprise: It would be a miracle if Australia produced a male player who could keep pace.

Jon Bon Jovi not dead, he proves on Twitter